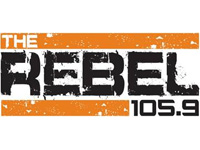 Earlier today, Cumulus Media Operations Manager Tom Mitchell told CNYRadio.com about Frisina's promotion, which is effective today. "Nobody in Syracuse has a better knowledge of classic rock and the Syracuse music scene over the past 35 years," said Mitchell. "Dave is a valuable player in the station's early success, and uniquely qualified to build on it."

105.9 The Rebel started on January 6, 2012, replacing the "Big Talker" format. Originally jockless (aside from the syndicated "Bob and Tom" morning show), the station added Frisina to host afternoons about a month later. He also brought along his long-running show "Soundcheck," which devotes an hour every Sunday night to locally-produced music. And during the course of the past year, Frisina started hosting a specialty show called "Soulshine," which airs from 10am to 2pm on Sundays.

Upon opening his show this afternoon, Frisina introduced listeners to "an old friend who happens to be in town," Roger McCue, who will take over middays starting on Monday.

The station's original midday host, Jessica Novak, recently stepped down from the post. Novak is also an editor for the Syracuse NewTimes weekly newspaper, a title she has held since before joining WXTL. She recently announced plans to embark on a cross-country road trip. While she'll continue to file reports for the newspaper from the road, she obviously won't be able to continue with the radio gig as she explores the nation's highways and byways.

In a brief conversation with Frisina on-air, McCue recalled it was 20 years ago this month that he first arrived on the Syracuse radio scene. He hosted evenings at TK99/105 until June 2003. McCue said he's as excited as Tim Tebow -- and Frisina joked, "we won't just keep you on the sidelines, you'll really be on the air."