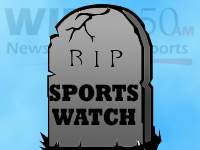 UTICA-ROME -- After decades as a staple on the weekday schedule at news/talker WIBX 950, the final buzzer has sounded on SportsWatch.  CNYRadio.com just got word of the show's cancellation as the final show was ending.  Readers who were tuned-in said co-hosts Jeff Monaski and Ray Rich ended the final show -- an abbreviated 30-minute edition -- with a brief tribute to the many people who hosted SportsWatch over the years.

Most weeknights, SportsWatch aired from 6-7pm.  During football season, the show ended at 6:30 on Fridays, when WIBX aired the syndicated "NFL Preview" show from Dial Global.

As of late Friday night, SportsWatch was still listed on the program schedule at wibx950.com.  The website didn't have any announcement about the show's cancellation, or about what would be filling the timeslot come next week.  CNYRadio.com contacted Monaski, who is also WIBX's program director, and Townsquare Media market manager Karen Carey, but given the fact it was after-hours on Friday when we learned about the change and had a chance to leave messages, it's likely we will not receive any further information about the changes until next week.

For many years, SportsWatch aired for two hours, from 6-8pm.  Over the last several years, the show's timeslot has been moved around within the afternoon drive window, that local news hour has been eliminated, and SportsWatch has been halved from two hours to one.  [Editor's note: we originally said the show aired for many years from 3-5pm, but it didn't move to that timeslot until sometime after Gene Conte and Fred Miller started hosting the show in 2008.  This was corrected on 1/16/13.]

During the majority of its run, SportsWatch benefited from having its own dedicated host, who could spend the bulk of the day booking interviews and preparing for the program.  Last year, Don Liable of the Utica Observer-Dispatch suggested Adam "the Bull" Gerstenhaber, who hosted the program from 2001-2004 was considered by "some" to be "the final credible host ... of the long and glorious history of the WIBX program."

That could perhaps be chalked-up to then-owner Regent's decision to eliminate the WIBX sports director position "The Bull" had held.  Since then, the show has been hosted by various WIBX staffers who juggled SportsWatch with other existing duties.  Among the examples, George Tharalson was the station's news director when he took over for "The Bull" in 2004.  Former co-host Gene Conte, who now works across town at Galaxy's ESPN Radio Utica-Rome (WTLB/WRNY/WIXT), doubled as WIBX's program director for most of his time hosting the show.

After Conte and co-host Fred Miller left WIBX for their present employer last year, WIBX put SportsWatch on hiatus for nearly two weeks until the Monaski and Rich assumed co-hosting duties.  As mentioned above, Monaski is also WIBX's program director, and co-host Ray Rich's primary focus is within the sales department.

SportsWatch is one of two locally-produced programs to be removed from the WIBX weekday schedule this month.  Today was also the final day for First Look, which debuted in 2004.  The hour-long interview program filled the 8am hour, between the station's morning news block and syndicated talker Glenn Beck.  Earlier this month, WIBX announced longtime local radio personality Bill Keeler will begin hosting mornings, starting on Monday.  "WIBX First News with Keeler in the Morning" will air from 6-9am.