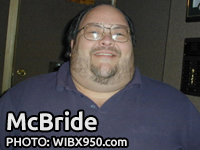 UTICA-ROME -- Longtime Mohawk Valley residents might remember him as a car salesman who appeared from a high perch in TV ads, or as a radio personality on a number of local stations. Frank McBride, who most recently worked at 92.7 The Drive (WXUR) has passed away at the age of 54.

McBride's first big break on radio was at the former Rock 107 (WRCK), as a sidekick to Bill Keeler, who broke the news this morning on WIBX 950. According to a story on the WIBX website, "Keeler says he received a text message in the middle of the night," about McBride's passing. Another Utica-Rome radio personality who contacted CNYRadio.com this morning said McBride had been ill for quite awhile.

Longtime area residents may remember when McBride worked for the former E. J. Peters Hyundai on Commercial Drive in Yorkville. The dealership had a large electronic message board about three or four stories off the ground, which McBride used as a perch when he appeared in TV ads.

This morning, Keeler said he remembers McBride for his "infectious laugh, and didn’t take himself too seriously."

Back in 2002, when Keeler was fired from WRCK, management promoted McBride from sidekick to host of the station's morning show. Seven years later, the two men would find themselves on the same station again -- Keeler was hosting afternoons at WXUR, when the station added McBride for the evening shift. About a month later, when Keeler moved to mornings at WXUR, McBride moved to afternoons.

On the WXUR website, there are tributes from station co-owner Mindy Barstein and program director Tom Starr. From the latter's tribute:

But what made Frank special to listeners and friends was the way he engaged us day in and day out. When he signed on 'from high atop the Jim Brock Building in my home town of Utica, New York' each weekday, you knew you could count on hearing things unique to that moment in time on each day's Big Show.

Somewhere along the way, Tom Starr took over afternoons, but McBride was still listed among the staff on the WXUR website as of Tuesday morning.