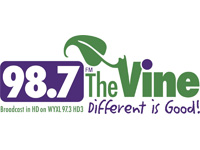 ITHACA -- Triple-A rock-formatted 98.7 The Vine (W254BF) has a new addition to its weekend lineup.  Every Saturday night, the station is taking listeners into Little Steven's Underground Garage.

That's the name of the syndicated program 98.7 The Vine is now airing on Saturdays.  And, rock music fans likely need no explanation that the program is hosted by Steven Van Zandt, the guitarist for Bruce Springsteen's E Street Band.  Even if you're not a huge fan of Springsteen, you might know Van Zandt as the actor who played Silvio Dante on The Sopranos.

Van Zandt has been hosting the nationally-syndicated "Underground Garage" program since 2002.

“We are very excited to bring Little Steven back to Ithaca’s airwaves. It’s an eclectic program on an eclectic station built for an eclectic city,” said Aaron Terkel, Brand Manager for 98.7 The Vine, in a press release.

That announcement also describes the program:

Little Steven’s Underground Garage explores ‘cool’ in all decades and styles of Rock and Roll. The show is a weekly celebration of Pop culture, the rock n’ roll lifestyle and often features new, emerging music from around the world.

Little Steven’s Underground Garage airs Saturdays from 10:00PM to Midnight.  98.7 The Vine, owned by Saga Communications, can also be heard via HD Radio on 97.3 WYXL HD-3.