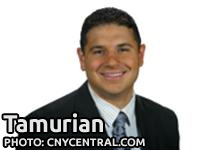 SYRACUSE -- Congratulations to East Syracuse native Niko Tamurian, who was officially named Sports Director for the CNY Central trio of television stations today.  He replaces John Evenson, who left earlier this month for a new job in Florida.

This morning, after a CNYTVNews.com reader pointed out Evenson's name and photo missing from the staff directory on the station website, CNYTVNews.com contacted CNY Central management to ask what was going on.  Nobody responded, but a few hours later, a story appeared on CNYCentral.com, announcing Tamurian's promotion and Evenson's exit for a new job in West Palm Beach.

Tamurian joined the team in 2007 as a part-time sports reporter/photographer, and became weekend sports anchor in 2008.  That year, he named Newcomer of the Year by the Syracuse Press Club.  He has also won several other SPC awards including Best Sports Story and Best Sports Show in 2009, along with best Human Interest story in 2010.

"Being born and raised here in Syracuse it's been an honor to deliver the latest sports news to our viewers over the past 6 years, especially since I was that viewer watching my entire life for the latest news on my favorite local teams," Niko says of his new job. "It's truly a dream come true to now be named Sports Director and to be able chart the course for our sports coverage going forward based on knowing what's important to Central New York.”

Tamurian's promotion results in a job posting for a full-time news/sports multi-media journalist.

Evenson came south from Canada to join CNY Central as Sports Director in 2006.  It's not clear which station Evenson is now working for -- assuming his new job is still within TV -- we couldn't find his name on the websites for the CBS, ABC, NBC or Fox affiliates in that market.

CNY Central is the three-station cluster which consists of NBC3 (WSTM-TV), CW6 (WSTQ-LP) and CBS5 (WTVH).  The former two stations are owned by Barrington Broadcasting.  The latter is owned by Granite Broadcasting, but operated by Barrington through a shared services agreement.

Anytime there's news happening inside your local radio or TV station, we're always grateful for your insider news tips.  Email us at cnyradio@cnyradio.com or use the Contact Form.  All requests for anonymity are always honored with the highest regard, and if you use the Contact Form, you don't even need to tell us who you are -- the name and email fields on the form are optional.