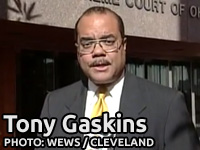 CLEVELAND, OH -- Tony Gaskins, who worked in Syracuse at channel 9 and WSYR radio throughout most of the 1980s, has died.  Family members say Gaskins passed following an apparent heart attack on Tuesday.  The Emmy-award winning reporter, known for his deep voice and unique sign-off, was 56 years old.

Word of Gaskins' untimely passing was first reported by Cleveland ABC affiliate WEWS, the station that lured Gaskins away from Syracuse in 1988.  Reporter Leon Bibb wrote, "When the phone call came from his family members [that] Tony had died of an apparent heart attack, it hit hard."

Gaskins started his broadcast career in radio news, in Harrisburg, Pennsylvania, in 1976.  According to a report on 9wsyr.com, a radio news anchoring job at 570 WSYR radio brought Gaskins to Syracuse.  A few years later, he moved over to television news at channel 9 (back when "9 News" was officially identified as WIXT) and stayed with the ABC affiliate through most of the 1980s.

Gaskins moved to WEWS in 1988, and worked there for 18 years.  In 1989, Gaskins received an Emmy award for a special that tracked the Underground Railroad paths slaves took through Ohio, as they journeyed from the southern states to Canada.  He left WEWS for a job with the City of Cleveland, serving as a producer and anchor for programs on TV20, the city's cable access channel.

Tony Gaskins' brother, Bill, told WEWS that Tony had often mentioned his desire to be an organ donor.  Both of Tony Gaskins' kidneys were donated to others.  Aside from his brother, Tony Gaskins is survived by his mother, his son, and his ex-wife.  WEWS says plans for a memorial service are pending.