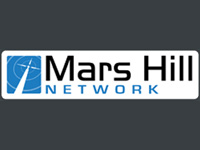 SYRACUSE -- The Mars Hill Network, which feeds religious programming to more than 20 stations across the state from its Syracuse headquarters, is seeking financial support.  The network, based at 102.9 WMHR, will be taking pledges during a three-day on-air "Careathon" next month.

Station officials say "Let Light Shine Out of Darkness" is the theme for this year's Careathon, set to air March 14, 15 and 16.  Volunteers will be on-hand to take listener pledges over the phone from 6:00am to 9:30pm on the first two days of the Careathon.  For the third and final day, the phones will be staffed from 6:00am to 11:00pm.  Pledges will be accepted over the phone at (800) 677-1881, or online at marshillnetwork.org.  Mars Hill's Craig Case tells CNYRadio.com all gifts are tax-deductible.

To help draw listeners to tune-in during the three-day fundraising effort, the network has lined up a number of local, regional and national guests who will "join on-air personalities to endorse the life-changing ministry of this listener-supported network."

Earlier this month, Mars Hill informed the FCC construction is complete for a new signal southeast of Utica.  WMHY 88.7 is licensed to Richfield Springs, in Otsego County, outside of the Utica-Rome market's "metro" area, but part of the market's total survey area (TSA) as defined by Arbitron.  The application for a "license to cover" is the final step in making the jump from a construction permit to a fully-licensed station.  (Admittedly, your editor missed the FCC filing for this one, but Scott Fybush from NorthEast Radio Watch noted it in his weekly column yesterday.)

The 60 dBu signal contour map filed with the FCC shows WMHY's transmitter is actually located several miles north of Richfield Springs, allowing the signal to cover both the village, along with the more-populated areas of Herkimer and Little Falls, both in Herkimer County.  To the northwest, WMHY's contour line almost perfectly meshes with that of sister station 90.1 WMHU Cold Brook.

Fybush says the broadcast antenna for WMHY is literally attached to the side of a silo, which explains the relatively-low height of 17 meters above ground level -- but the site gives the antenna a height of 116 meters above average terrain.  WMHY is broadcasting at 614 watts ERP.  The construction permit for WHMY would have expired today, but the "license to cover" application, dated February 14, beats that deadline by just shy of two weeks.

The FCC says the application is "accepted for filing," which means a preliminary review did not reveal any reasons for the FCC to object to the application.  Assuming the usual public comment period passes without incident, the station should receive final approval for the new station within the next several weeks.