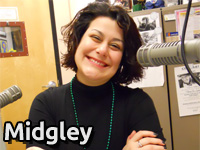 Fiss tells CNYRadio.com, "I wish Melissa all the best and I'm grateful for her friendship and the fun times we had."  Last year, Midgley was profiled in Syracuse Woman Magazine.  Midgley, who primarily works as a school teacher, recalled that she got her start in radio by calling Fiss one morning to vent about the previous night's episode of American Idol.

She continued to call in to discuss other topics, and eventually, was offered the chance to join Fiss in-studio every morning as his co-host.

Of his new co-host, Fiss says listeners may recognize Cindy Humble from Sunny 102's weekend lineup. She's also the office manager for Sunny 102's owner, Galaxy Communications. "Cindy is one of the funniest people I know," Fiss said, adding, "I think when our listeners get to know Cindy, they'll love her!"