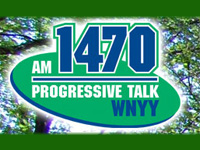 ITHACA/CORTLAND -- Progressive Talk 1470 (WNYY) is a big step closer to gaining a presence on the FM dial.  The FCC says it has approved the sale of a construction permit for a future FM translator to WNYY owner Saga Communications.

Although WNYY is technically already available on the FM dial, listeners would need a relatively pricey HD Radio receiver to hear the simulcast on the HD2 subchannel of Q-Country 103.7FM (WQNY). When the construction of translator W249CD is complete, listeners will be able to hear a simulcast of WNYY's programming at 97.7FM with an ordinary FM radio.

The plan was submitted to the FCC in December. Cavalry Chapel of the Finger Lakes, the original permit holder, had stated it would simulcast WZXV from Palmyra once the new station was up and running.

In one application, Cavalry filed for FCC approval to transfer the construction permit to Saga Communications, the owner of WNYY and several other stations known collectively as the Cayuga Radio Group.  Documents filed with that application indicated Saga would pay $60,000 if the deal goes through.

Both applications were "accepted for filing" on December 26.  The FCC approved the sale on February 21, but the announcement only appeared in the Commission's "Daily Digest" today.  That was probably of little suprise, considering the separate application -- covering Saga's plans for the translator -- were approved a week earlier.

In approving the transfer, the FCC issued its usual reminder that all construction permits carry a three-year deadline, regardless of any transfer of control.  But, that's likely not a problem for Saga -- the deadline of October 18, 2015 leaves the future permit holder a little over two and a half years to get W249CD on the air.

In addition to a regular lineup of progressive talk programs, 1470 WNYY also carried Buffalo Bills football games this past season, the first time in recent memory that the NFL squad has had a radio affiliate in the area.