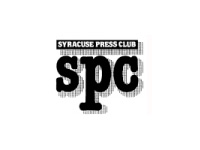 SYRACUSE -- Non-commercial radio stations and Syracuse TV stations dominated in their respective categories in the Syracuse Press Club's annual Professional Recognition Awards competition. The club released the list of winners for the contest, which was open to all media outlets within the SPC's 21-county service area.

The list released this week only names the winners, but not the rankings. Winners will learn whether they earned first place or second place at the club's annual awards dinner on Saturday, May 4 at Drumlins Country Club.

Although the SPC's coverage area also includes stations in the Binghamton, Elmira, Watertown and Utica markets, all but two of the awards will be given to outlets in Syracuse. Utica NBC affiliate WKTV is up against Syracuse ABC affiliate WSYR-TV in the Spot News category. In the Documentary category, John Moore of Watertown CBS affiliate WWNY is up against an entry from WSYR-TV's Dan Cummings, Scott Irving and Jim Kearns.

In all other categories, Syracuse outlets dominated the awards. Time Warner Cable's YNN leads the pack with a total of 9 awards. WSYR-TV and the CNY Central team (NBC affiliate WSTM-TV, CBS affiliate WTVH and CW affiliate WSTQ-LP) are tied with 7 awards apiece, while PBS affiliate WCNY-TV will be taking home three awards.

Among the radio categories, all of the awards will be divvied-up between two non-commercial stations: Syracuse University's WAER-FM and SUNY Oswego's WRVO-FM. The two stations are up against each other in the Spot News category. In virtually every other category, both first and second place will go to the same station. WRVO has both winning entries for the Investigative and News Feature categories, while WAER swept the Sports Story and Sports Show categories.

In the Human Interest feature category, WAER's John Smith is up against freelancer A. Randall Wenner. Notably, there were no entries from commercial radio newsrooms including Syracuse's WSYR-AM/FM, Utica's WIBX, Ithaca's WHCU, Watertown's WTNY or Binghamton's WNBF.

Worth noting in the Online Journalism categories, Utica's WKTV is up against the Syracuse Media Group's Post-Standard companion website, syracuse.com, for bragging rights in the News Website category. And for individual blog posts, YNN's Amanda Seef will be recognized for her work with eaglenewsonline.com, prior to her joining the Time Warner local news channel.

After winning second place for the past two years in the Online Public Service category, we regret to share the news that CNYRadio.com and CNYTVNews.com were not considered for this year's SPC contest. Contest coordinator Mike McAndrew informed us several weeks ago that, because there were no other entries in the category this year, the category was dropped from the contest.

In addition to learning the first/second place rankings for the awards, as well as the titles of the winning entries (which were not included on this early list), the SPC has not yet revealed the winners of this year's "Club Awards." Nominations have been accepted to recognize excellence in professional standards, career achievement and best news source. There will also be an award to recognize a standout "newcomer" who has been in the business for three years or less.

The SPC will also award a $2,000 scholarship to a local student who is pursuing journalism at the college level. The scholarship is funded by proceeds from the awards contest and dinner. Reservations are now being accepted on the SPC's website. The cost is $40 per person, and tables of ten are available for $380.