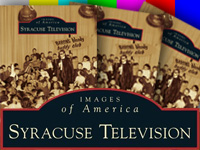 SYRACUSE -- Did you know Syracuse's first TV station set a new record the moment it signed-on?  Or that the very same cameras which captured The Beatles' historic appearance on The Ed Sullivan Show would eventually be bought and used by one local station?  These tidbits and many more are part of a new book about the history of Syracuse television, which goes on-sale later this month.

The book is called Syracuse Television, and it's part of Arcadia Publishing's Images of America series.  The book will retail for $21.99 when it goes on-sale March 25 at local retailers and online bookstores.  You can also order copies directly from the publisher at www.arcadiapublishing.com or (888) 313-2665.

In just 128 pages, the softcover tome provides a detailed accounting of television in the Salt City, starting with WHEN-TV's 1948 debut as the only station in town, right up through the present day landscape -- in which WTVH (formerly WHEN-TV) now shares a building with former competitor WSTM, and the major network affiliates face more competition than ever from cable, satellite and internet sources.

As television is a visual medium, it's appropriate that the majority of this book is filled with photos -- literally hundreds of them, starting with the front cover shot of channel legend Mike Price surrounded by young fans during a taping of his popular "Baron Daemon" program.

Even if you aren't old enough to remember all of the people, shows and historic milestones in this book, you'll feel like you were along for the entire ride.  The book also mentions what many Syracuse TV "alumni" are up to today -- including a mention as recent as former WTVH anchor David Muir becoming co-anchor of ABC's 20/20, which just happened at the end of January.

The book is divided into five chapters.  The market's "big three" network affiliates each get their own chapter, starting with CBS affiliate WHEN-TV on channel 8, which later became WTVH channel 5.  The next station to get off the ground was the NBC affiliate, which started as WSYR-TV on channel 5 before moving to channel 3, and later, changing its call sign to WSTM.  The third chapter covers "Colorful Channel 9," which started out as WNYS before becoming WIXT, and then, WSYR-TV.

The fourth chapter details the history of PBS affiliate WCNY-TV, which signed-on before PBS existed.  The book explains how WCNY obtained its "network" programming in the days before PBS came along with satellite or cable network connections.  And yes, there's a photo of the aforementioned Ed Sullivan Show cameras in service during the very first WCNY TelAuc fundraiser.

The final chapter, titled "New Choices," is focused mostly on Time Warner Cable's YNN (and its start as News 10 Now), along with brief mentions of the market's major UHF stations including Fox 68 (WSYT) and CW6 (WSTQ), and photos of the original news sets from both stations.  Mentions are also made to a couple of local cable access productions.

Syracuse Television was written by Christie Casciano Burns, Tim Fox and Lou Gulino.  Burns and Fox have spent their entire television careers at channel 9.  Gulino recently joined them as a co-worker, after spending more than 30 years between WTVH and WSTM.

According to a press release CNYTVNews.com received with our advance copy of the book, the entire project got started during an ordinary conversation one night in the channel 9 newsroom, between Gulino, Burns and anchor Rod Wood.  In the book, the authors acknowledged Wood -- who worked at channel 5 for years before joining channel 9 in 1976 -- for providing "direction, insight and help in identifying many of the people in our photograph collection."

Some photographs were provided by local television stations and personal collections.  A great majority of the book's photographs come from the archives of the Onondaga Historical Association in Syracuse.  The authors have said a portion of the proceeds from sales of the book will be donated to OHA.

Again, the book is Syracuse Television, $21.99, Arcadia Publishing.  On-sale March 25 at local retailers, online bookstores and directly from the publisher at www.arcadiapublishing.com or (888) 313-2665.