Save the Date: Bill Leaf kickball tourney slated for Sept. 7 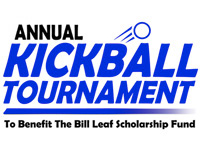 SYRACUSE -- Mark your calendars for September 7.  That's the date for the 8th annual Bill Leaf Memorial Kickball Tournament.  Along with the new date (it's usually been held later in September), the tournament will have a new home this year, a few miles away from the original location.

According to Bill Leaf's sister, Maria, this year's tournament will take place at the kickball fields on Route 57 in Liverpool -- across from the FasTrac near New York State Thruway Exit 38.  For the past seven years, the tournament took place on the ball fields at Onondaga Lake Park.  Maria Leaf tells CNYRadio.com of the new location, "that's where the kickball leagues play" now, and organizers are "hoping that helps us generate some new teams."

At this point in time, Maria Leaf says registrations aren't being accepted yet, but organizers wanted to make sure supporters save the date.  She also encourages people to "start getting your teams together now!"  In previous years, the tournament has followed the same rules as the leagues: each team needs at least 8 players, and at least 4 must be women.  This year's official rules, registration fees and a brand new website will be announced in the coming weeks.  As soon as we learn more, we'll provide updates here on CNYRadio.com.

Syracuse native and Newhouse graduate Bill Leaf was a news anchor/reporter for 570 WSYR radio and a sports anchor for WTVH-TV who lost his life in a head-on crash along Interstate 81 in 2006.  The other driver, who was going the wrong way, was drunk and survived.  Matthew Benedict was convicted of 2nd degree manslaughter and 3rd degree criminal possession of marihuana.  He is serving a prison sentence of 6-12 years, and was denied parole last year.

Bill put together a memorable, award-winning story about the adult kickball leagues at Onondaga Lake Park.  That story spawned the idea of creating a kickball tournament in Bill's memory.  The first one took place just a few months after his death.  Proceeds from the tournament benefit the Bill Leaf Memorial Scholarship.  Each year, the SU Alumni Club awards the scholarship to someone like Bill Leaf — a local student who has decided to pursue studies in broadcast journalism at Syracuse University’s S.I. Newhouse School of Public Communications.  Leaf graduated from Syracuse’s Henniger High School prior to graduating from SU in 2002.

Since 2008, the tournament has also helped to support a scholarship at Liverpool High School in memory of Samantha Reynolds, a teenager who was also killed in a head-on crash involving a drunk driver.  She and her family were driving to Disney World for their spring break vacation in 2008.