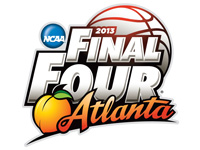 Updated 4/5 -- ATLANTA -- For the first time since 2003, the Syracuse University men's basketball team has reached the Final Four of the NCAA tournament. Several local radio and TV stations have dispatched crews to Atlanta to cover the team's next game on Saturday... and hopefully they'll have a reason to stick around for the championship game on Monday.

On the radio side, Gomez and Dave are doing their morning show on Syracuse's TK99/105 (WTKW/WTKV) and Utica's 96.9 WOUR live from Atlanta. Galaxy Communications also sent Chris McManus from ESPN Radio 97.7/100.1 (WTLA/WSGO) to the Georgia Dome to host the locally-produced afternoon sports talk show, Upon Further Review.

Jumping over to the TV side, McManus is joined in Atlanta by his usual co-host, NewsChannel 9 (WSYR-TV) sports director Steve Infanti, who is also filing reports for the ABC affiliate. NewsChannel 9 also sent longtime anchor Carrie Lazarus to work on some alternate angles -- for example, she posted on Facebook today, she talked with Juli Boeheim, the wife of SU men's basketball coach Jim Boeheim, for her perspective on the team's ascension to the Final Four. She also interviewed the wives of Boeheim's three assistant coaches. That report's scheduled to air tomorrow.

Added 10:45pm -- Sports Director Mike Levin from Utica NBC affiliate NEWSChannel 2 (WKTV) is also in Atlanta and he'll be filing reports for all of the station's newscasts on Friday.

Added 11:20pm -- We've been reminded that Syracuse University's own WAER 88.3 has broadcast every game so far, and they have a crew of four in Atlanta. The student broadcasters will be doing play-by-play and post-game live from the Georgia Dome.

Added 4/5 -- In addition to Mark Larson, we've been informed that YNN also sent anchor Erin Connolly and reporter Brad Vivacqua to Atlanta.  Live cut-ins started yesterday, and they'll continue -- along with some special long-form shows -- throughout the weekend.

We assembled this report based on reports we've seen on-air, or posts on various social media feeds or station websites. If we happened to miss anyone, it certainly wasn't intentional and we'll gladly update the article -- just drop us a line at cnyradio@cnyradio.com.