Local broadcasters and the Boston Marathon 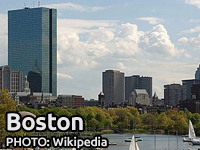 Updated 4/16 -- CENTRAL NEW YORK -- In the hours after the Boston Marathon bombings, we're learning how some Central New York broadcasters who were in Boston today are faring.  Thankfully, all of the reports are positive.

Just based on what we happened to see on Facebook and Twitter, former WSTM news producer Jay Holder was running the marathon but avoided the chaos.  (Added 4/16) In an interview with syracuse.com, Holder said he had finished the race before the explosions and headed back toward the scene after learning what happened.  He provided some live reports for his current station, New York's WABC-TV, via iPhone, until a live truck arrived from New York.  Holder told reporter Douglass Dowty his brief visit will now be several days longer as he remains on-scene for continuing coverage.

In terms of Central New York stations covering the attacks, to the best of our knowledge, WKTV's Lexie O'Connor filed the first reports from Boston -- the Utica NBC affiliate says she hails from Boston and happened to be visiting home for marathon weekend.  She checked-in on the phone for WKTV, while on lockdown in a Boston apartment building earlier.  Time Warner Cable's YNN aired an interview with Tarah Snee, niece of YNN CNY senior reporter Bill Carey.  Snee finished the marathon just moments before the explosions.  CNY Central also had a live phone interview with Joe Benny, the brother of WTVH anchor Michael Benny.  Joe Benny was in Boston to cheer on friends who were running today.  All are fine.

If we missed anyone, please let us know.

From Syracuse, CNY Central (WSTM/WTVH/WSTQ) is sending reporter Alex Dunbar and photographer Lewis Karpel to Boston.  The crew is expected to file live reports from Boston throughout the day tomorrow.

We've also heard former WSYR-TV reporter Kevin Torres is being sent to Boston to cover the story for his current station, KUSA-TV.  The Denver NBC affiliate is also sending Kyle Clark (formerly of nearby Rochester's WHAM-TV) and a photographer.  They're hoping to find people from Colorado who were either running in the race or helping others in some way following the blasts.

A scan of various TV and radio station websites, Facebook pages and Twitter feeds didn't indicate any other stations are sending crews to Boston, but please do let us know if we missed anyone, and we'll update this story.  Email cnyradio@cnyradio.com or send a message through the Contact Form.

Same goes for any special programming such as telethons, radiothons, blood drives, etc., that might materialize in the coming days or weeks -- we'd like to do our part to help share the word.