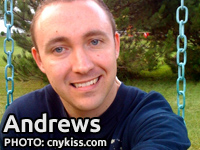 UTICA-ROME -- Congratulations to Kiss-FM (WSKS/WSKU) middayer and program director Shaun Andrews, who marks his 15th anniversary with the CHR-formatted station today.  Andrews says he was just 17 years old when he walked into the station for the first time, back when Kiss was on-air at 102.5FM, while the station's present-day 97.9 and 105.5 frequencies were "the competition," as Wow-FM.

Less than a week after walking in the door as a high school intern, Andrews was hired to run the board on Sunday mornings, ensuring the station's weekly public affairs programming aired properly, along with syndicated fare such as the Fox Family Countdown, followed by Rick Dees' weekly countdown show.

Eventually, Andrews would get his first taste of on-air work by filling-in on the overnight shift.  After cutting his teeth in the dark of night, Andrews eventually landed himself some daylight on-air time on weekends.  Graduation from Herkimer County Community College in 2000 paved the way for Andrews to join the staff full-time, adding office duties such as running the traffic department.  In 2001, he became Assistant PD, and over the next few years, he'd move to nights, then mornings, then afternoons, and, in 2009, to his current midday shift.

In 2006, Andrews was promoted to program director, "thankful for all the tutelage and life lessons that I learned along the way," he wrote on the Kiss-FM website.

Andrews also thanked many of his co-workers from the past 15 years, including several who've since moved to other stations, and at least one (Bryan Lakes) who's been at Kiss-FM longer than himself.

Wrapping up his retrospective, Andrews wrote, "I’ve gone from being a super skinny 17 year old, to 32 year old me in what seems like a blink of an eye. Thank you everyone, friends, family, co-workers and most importantly you the listeners who have been a part of my journey with KISS-FM."

Congratulations to Shaun on his anniversary, and thanks to "S-Dot" for posting a comment to give us a heads-up earlier this week that this milestone was coming up!