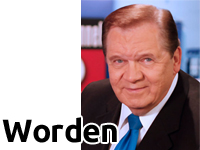 UTICA -- Although Bill Worden received plenty of accolades during his final newscast prior to retiring from NewsChannel 2 (WKTV) last November, there's still at least one more on the way. Worden, who was the NBC affiliate's primary anchor for 35 years, will recieve the Syracuse Press Club's Career Achievement Award next weekend.

This afternoon, the Syracuse Press Club revealed its decision to recognize Worden with the Gus Bliven-Joe Ganley-Mario Rossi Career Achievement Award. The award will be presented at the club's annual Professional Recognition Awards and Scholarship Dinner next Saturday, May 4, at Drumlins Country Club in Syracuse.

"He was not just a newscaster," WKTV Station Manager and News Director Steve McMurray said of Worden, "he was an institution—one that I’ve been fortunate to watch, learn from, and work alongside."

"For more than three decades, Bill was a fixture in Central New Yorkers’ homes. Tens of thousands of local residents have grown up watching Bill deliver the biggest stories that helped shape this region," McMurray said.

Other awards slated for May 4

Earlier this week, the SPC named Onondaga Community College senior Paul Valentino as the recipient of this year's Devesty-Williams Scholarship. Valentino, of Liverpool, will be graduating from OCC's electronic media communications program this semester, and plans to continue his studies at either Syracuse University or SUNY Oswego. The scholarship is funded by proceeds from the SPC's awards dinner, and is open to college students native to the SPC's 21-county membership territory who are studying towards a career in the news media.

Aside from Worden's honor, the SPC has not yet officially announced any other "Club Award" recipients, but word leaked via Twitter a few weeks ago, that CNY Central reporter Tom Eschen will receive the A. Brohmann Roth Newcomer Award:

Congratulations to @tomeschenjr - named Newcomer Of The Year by @syrpressclub (cc: @cnyradio) He follows in esteemed footsteps.

About Benny's reference to following in "esteemed footsteps," the CBS5 (WTVH) managing editor/anchor won the award himself in 2001.

Other club awards, 2013 winners yet to be announced, include the The Philip A. Hofmann President's award for Best News Source and the Selwyn Kershaw Professional Standards Award.

All winners for the competitive professional recognition awards categories were announced previously -- though the club hasn't yet revealed the rankings (first or second place). Those details will be revealed at the awards dinner. Tickets are still available at $40 each, or $380 for a table of ten. You can get more details and order online via the SPC website.