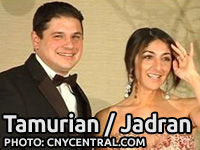 Tamurian and Jadran were among the volunteer models for a fashion show to benefit the Ronald McDonald House last Thursday night. As reported by Michael Benny on cnycentral.com, Tamurian secretly arranged for himself and Jadran to be the last pair to walk out onto the runway. As they reached the end of the walkway, Tamurian knelt down, presented the ring, and asked the big question. "The crowd went wild," Benny wrote. Jadran said yes.

On his Matt's Memo blog, WSTM's Matt Mulcahy recalled the night when Tamurian first expressed his interest in Jadran. Mulcahy says he and Tamurian were sitting on the set with Chief Meteorologist Wayne Mahar during an 11pm newscast, watching the pre-taped WCNY Business Report. That night, Jadran was filling-in for the regular anchor.

With the studio mics turned off while the taped report aired, Tamurian commented that he wanted to ask Jadran out for a date. Mulcahy remembers, "I quickly jumped on Niko's comment, encouraging him and even challenging him to do exactly that. Niko rose to the occassion and made the call that would change his life."

In both reports, Benny and Mulcahy had nothing but wonderful things to say about the newly-engaged couple. We join them both in congratulating Niko and Farah, and we wish them all the best.