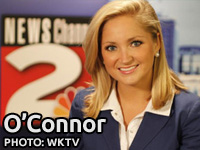 UTICA -- Just a few months shy of her second anniversary at NewsChannel 2 (WKTV), reporter Lexie O'Connor is packing her bags and moving north.  Friday was O'Connor's last day with the NBC affiliate.  She has accepted a new job with CBS affiliate WGME in Portland, Maine.

The move is positive in two ways: moving to Portland puts O'Connor much closer to her native Boston.  And it's a significant jump in market size -- Nielsen considers Portland-Auburn, Maine to be the 80th largest television market in the United States, with almost four times as many viewers as the Utica market, ranked at #172.

According to an article on WKTV.com, O'Connor joined the station in August of 2011.  She provided live coverage on the aftermath of the Boston Marathon Bombings, as she happened to be there visiting friends when the events unfolded.  O'Connor is a 2011 graduate of Boston University's broadcast journalism program.  We wish her all the best in her new venture!

O'Connor's departure means WKTV is looking for two General Assignment Reporters/MMJs (we presume one of the openings had already existed).  You can find all the details on requirements and how to get in touch with WKTV Station Manager/News Director Steve McMurray on the WKTV website.  (And while we're at it, the Production Department has an opening for a Commercial Shooter/Editor, who can also serve as a backup Director.)

Our thanks to one of O'Connor's co-workers for giving us the "heads-up" on her departure!  Anytime there's news happening inside your local radio or TV station, we're always grateful to hear from you at cnyradio@cnyradio.com or through the Contact Form.  Requests for anonymity are always honored with the utmost regard, but if you don't even want us to know who you are, just leave your name and email blank when you use the form.