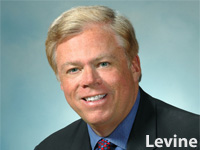 SYRACUSE -- Recent changes at the Syracuse Post-Standard have resulted in a "stunning" increase in revenue for local radio stations. That's according to Galaxy Communications CEO/President Ed Levine, who says the newspaper's changes have helped not just his own stations, but the entire Syracuse radio market as a whole.

Levine's comments made the top story in this morning's Tom Taylor Now newsletter, distributed to radio professionals nationwide. (Subscriptions are free and each day's edition of TTN hits inboxes before sunrise each weekday.)

Although the Post-Standard still publishes 7 days a week, the paper is delivered to subscribers and retailers throughout Central New York on only three of those days. On the other four days, the paper is considerably smaller, and is only available for sale at retail locations in Onondaga County. The changes were announced months in advance, with the Syracuse Media Group explaining it is positioning itself to put more focus on its website, syracuse.com, in response to the changing habits of news consumers.

Levine told Taylor, "we had hoped to see some revenue growth" following the changes at the Post-Standard, and he was pleasantly surprised when the numbers came in: "the influx of radio dollars has been nothing short of stunning."

Calling Syracuse "2013's hottest radio market (so far)," Levine tells Taylor the entire market "was up over ten points for Q1 in total spot," and double that for local spot.

Levine said Galaxy has "converted a large number of clients to radio from print."  In the Syracuse market, Galaxy owns modern rock K-Rock (WKRL/WKRH), classic rocker TK99/TK105 (WTKW/WTKV), classic hits Sunny 102 (WZUN), ESPN Radio 97.7/100.1 (WTLA/WSGO) and Spanish-language ESPN Deportes (WSCP). The company also owns a handful of radio stations in the Utica-Rome market, and it has an entire division dedicated to producing events such as festivals and concerts.

Although Levine notes he's watching carefully as the Post-Standard's "co-owned paper in New Orleans just reversed course and went back to a 7 day a week schedule," a report in The New York Times explains that the New Orleans paper's "new" 7-day schedule will be similar to the existing schedule in Syracuse -- the "full" paper will continue to be published only 3 days a week, with a smaller newsstand-only version offered on the other 4 days.