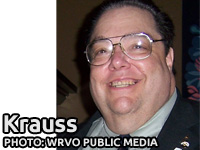 OSWEGO -- His voice was the very first to be heard when WRVO debuted in 1969.  John Krauss would stay with the Oswego station for the next 41 years, working his way up the ranks, eventually serving as General Manager from 1996 until his retirement in 2010.  Today, we're sad to report Krauss has died.

According to current GM Michael Ameigh, Krauss passed away yesterday at Oswego Hospital.  He was 64.

Even though Krauss retired from his full-time employment in 2010, the station kept him listed on its website as "General Manager and Host Emeritus, WRVO Playhouse."  Krauss was also an amateur radio operator, with an FCC license to identify himself by the call sign W2RVO.

During the 70s and 80s, Krauss helped WRVO expand its footprint many times over -- first, though a series of power increases at the Oswego transmitter site, and later, with the addition of repeaters in Watertown, Utica, Syracuse and Cortland.

When Krauss retired in 2010, the station brought in popular NPR host Carl Kassel to host a special retirement farewell party attended by many listeners.

Former WRVO General Manager and on-air host John Krauss died June 17 in Oswego, N.Y.  Krauss was one of the longest serving station administrators in public broadcasting having held various managerial titles for more than 40 years, 14 as general manager. He retired in 2010. Krauss was 64.

Krauss started at the then ten-watt WRVO on January 6, 1969 – the day the station signed on the air at SUNY Oswego. WRVO’s primary transmitter at Oswego now broadcasts at 50,000 watts.

“It would be impossible to overstate John’s contribution to the growth of WRVO over the years,” said current WRVO General Manager Michael Ameigh. “When he took over as general manager WRVO had five full-time staff members. At the time of his retirement the staff numbered 17,” Ameigh added. “He was first and foremost an engineer whose understanding of signal propagation and other technical aspects of broadcasting resulted in expansion to a network of 10 transmitters serving at least 20 counties of upstate New York.”

According to Ameigh that expansion will continue thanks to Krauss’ expansionary vision. “John’s foresight in applying a decade ago for additional repeaters to fill voids in WRVO’s signal coverage, particularly in the Mohawk Valley and southern Finger Lakes, will result in additional coverage.”

To many WRVO listeners John Krauss may have been best known as the long-time host of ‘The WRVO Playhouse,’ a nightly rebroadcast of national network radio programs from the 1930s-1950s. WRVO’s current Senior Producer Mark Lavonier, an expert in his own right on the history of old time radio, has continued that legacy as host of ‘Tuned to Yesterday,’ a spinoff of the Playhouse format heard daily from 10 p.m. to midnight on WRVO. WRVO’s archive of Golden Age radio programs is one of the most extensive and complete in the world.

Krauss was predeceased by his wife, Judy, who worked as WRVO's donor services manager.  They were married for 19 years when cancer claimed Judy Krauss in 2002.

Updated 6/20: Funeral arrangements have been announced.  A new story has been posted with details on calling hours, memorial services and a full obituary.

Over the years, many broadcasters -- either as professionals or as students -- crossed paths with John Krauss inside the WRVO studios.  Feel free to share your memories and/or condolences in the comment section below, either via Facebook, or with your free CNYRadio.com login.

2022♦ CNY Central Promotes Hull and DesRosiers to Anchor Spots2012♦ Where Are They Now: Promotions for Kevin Keefe and Jeanne Ashley2010♦ Mike Cauchon Leaving 93Q, Station Seeking Replacement♦ While We Were Out...2004♦ Adam 'The Bull' on the move2002♦ Naughton named program director at Lite 98.72001♦ 95X to sponsor Armory Square rally♦ Sammys postponed until early next year