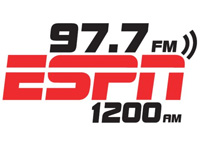 SYRACUSE -- There's going to be a new radio home for Syracuse Crunch hockey when the AHL affiliate of the Tampa Bay Lightning takes to the ice this season. The team is partnering with ESPN Radio 97.7/100.1, owned by Galaxy Communications. The deal ends a three-year run with Cumulus Media-owned The Score 1260 (WSKO).

Even though your editor is still on a hiatus announced earlier this summer, we promised to keep an eye on things and share any "major" breaking news that might develop during the sabbatical.

In a press release on the hockey team's website, Galaxy CEO/President Ed Levine said, "We are very excited to have ESPN Radio as the new flagship for the Crunch ... fans will now be able to hear the games on FM and AM for the first time." Levine also promised his stations "have some crazy ideas planned to add to the legendary promotional prowess of the Crunch," with plans involving other Galaxy stations such as K-Rock, TK99, and classic hits Sunny 102.1 (WZUN).

In the same announcement, Dolgon said the new deal, "at the end of the day, will be a benefit to all hockey and sports fans in Syracuse."

Broadcaster Dan D'Uva will return to the broadcast booth for his second season as the Crunch's lead play-by-play announcer. The Crunch begin their season on Saturday, October 5, on the road against the Binghamton Senators.

ESPN Radio CNY will carry all 76 regular season games -- 38 home and 38 away -- plus any Calder Cup playoff games the Crunch play. (Last year, the squad made it all the way to the finals for the first time ever, losing at home to the Grand Rapids Griffins in game 6 of the best-of-7 series.)

ESPN Radio CNY originates from AM stations WTLA 1200 North Syracuse and WSGO 1440 Oswego, but primarily brands itself using the frequencies of two FM translators which simulcast the signal -- 97.7FM in the Syracuse area and 100.1 in the Oswego area.

From the "while we were out" file, Galaxy Communications also has a radio deal with the AHL's newest team, the Utica Comets. When the team begins its inaugural season next month, games will be carried on 94.9 K-Rock (WKLL/Frankfort). The Crunch and Comets are scheduled to face each other four times during the upcoming season.  The Comets -- formerly the Peoria Rivermen -- have retained Brendan Burke, who has been the team's broadcaster for the past five years.

Another blow for 'SKO

There was no comment from the Syracuse Crunch regarding the team's decision to discontinue its relationship with The Score 1260, which already lost Syracuse Chiefs baseball earlier this year. The Triple-A affiliate of the Washington Nationals chose to bypass broadcast radio altogether, opting instead to webcast games exclusively through its own website and mobile apps.  Chiefs GM John Simone told CNYRadio.com he was unhappy with a number of aspects of the partnership with WSKO.

Earlier this year, Simone told syracuse.com his team was spending $25,000 a year for the airtime to broadcast the games on WSKO, and he thought the money could be better spent on other efforts.  Last week, syracuse.com's Lindsay Kramer asked how the streaming-only strategy is working out -- Simone said he's not making any decisions just yet.