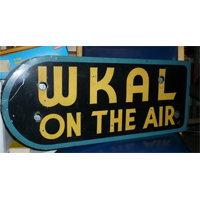 UTICA-ROME -- It's been a long time in the works, and the signal has been on-again/off-again several times over the past two years.  Today, some sure signs of progress -- management has announced the station's eventual format, and they're taking applications for a number of job openings.

GM Ron Frisch tells CNYRadio.com the station will be back on the air "soon" as TalkRadio 1450.  No word yet on an exact date or any hints at the programming lineup, but we know one thing for sure -- Frisch plans to hire a local host for morning drive.  That comes from the following list of job openings:

A complete job description will be available during the interview. Please email resumes and salary history in strict confidence to: wkal1450@yahoo.com EOE

Although Tune-In Broadcasting purchased WKAL (formerly WYBY, then WRUY) back in 2011, the station has been silent for a majority of that time.  That can be attributed chiefly to the fact the former owner, Bible Broadcasting Network, operated the station with non-commercial status, exempt from the FCC's requirement to maintain a local studio.  When Tune-In closed on the purchase, it obtained special FCC permission to remain silent while it sought a location and engaged in construction for a new local studio.

Earlier this year, test broadcasts could be heard (we recorded a clip and shared back in May) but not until today has there been any indication of the long-term plans for WKAL.

Among the reasons it took so long to secure a studio site, Frisch told CNYRadio.com, "It has been a tough job to find studio space at a location that had the proper installed technology (internet for example, as there are locations in Rome without internet access) as well as allowing us to install a 12 foot sat dish on the property."

Frisch also confirmed a tip we received some time ago -- the new WKAL studios are located at 1721 Black River Boulevard in Rome.