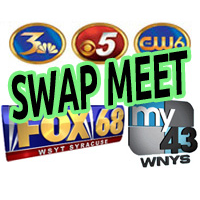 SYRACUSE -- Three local television stations will soon have new owners, after the Federal Communications Commission approved two separate deals which were initially announced in February. Barrington Broadcasting is selling all of its stations -- including Syracuse's NBC3 (WSTM-TV) and CW6 (WSTQ-LP) to Sinclair Broadcast Group, owner of Fox 68 (WSYT). But because FCC ownership limits forbid Sinclair from owning all three stations, the company will be shedding itself of WSYT -- at least, on paper.

It was nearly a year ago when national TV industry trades first reported the possibility of a Sinclair/Barrington deal, but nothing was officially announced until the end of February. More than 8 months later, the FCC has approved Barrington's sale of WSTM-TV and WSTQ-LP to Sinclair Broadcast Group.

According to a trusted source who spoke to CNYTVNews.com on a condition of anonymity, it is believed that Sinclair and Barrington are looking to close on the sale rather quickly, possibly by the end of this week or next. When that happens, Sinclair will own WSTM and WSTQ, and it will inherit Barrington's shared services agreement to operate CBS5 (WTVH) for Granite Broadcasting.

In a simultaneous deal, Sinclair is selling WSYT to Bristlecone Broadcasting. An asset purchase agreement filed with the FCC says Bristlecone is paying $20 million to pick up the Fox affiliate, along with Sinclair's long-running shared services agreement with RKM Media for My43 (WNYS).  The deal also includes a purchase option on WNYS.

However, a look through the FCC paperwork on the latter sale shows Sinclair will remain in control of the day-to-day operations at WSYT and WNYS for at least six more months. Through a "transition services agreement" filed on the FCC website, Bristlecone will pay Sinclair to handle engineering, programming, traffic, accounting and website/digital services "through and until the 180th day after the Closing Date."

Further review of the documents on the FCC website seems to indicate that Sinclair is only selling the "assets" of WSYT to Bristlecone. Sinclair will continue to own the 1000 James Street building which houses WSYT and WNYS, as well as the Otisco transmitter site from which WSYT's signal originates.  Sinclair will lease both the studio/office space and the transmitter site space to Bristlecone.  Both agreements call for an initial term of 10 years, with an option to renew for two additional five year terms thereafter.

At the end of the day, Sinclair will satisfy FCC requirements by removing its name from the WSYT broadcast license, but it appears the company is keeping itself in a position to continue generating revenue from WSYT and WNYS by providing services for and acting as a landlord to Bristlecone Broadcasting. (And we can't help but wonder if this could eventually lead to a repeat of what happened in 2009, when WTVH moved its assets into the WSTM building.)