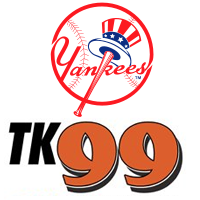 SYRACUSE -- As announced moments ago on "The Gomez and Dave Show," baseball's New York Yankees are moving to TK99 and TK105 (WTKW/WTKV) next season.  The classic rock stations, simulcasting in Syracuse and Oswego, will air all 162 regular season games as part of a "multi-year" deal, taking the Bronx Bombers away from Clear Channel's NewsRadio 570 WSYR.

Airing live sports on a classic rock station is nothing new for Galaxy... TK99/TK105 are the flagship stations for the Syracuse University football and men's basketball radio networks.

Gomez and Dave make a major announcement on Friday morning at 8 with a surprise guest later that hour.

A day before that tweet, someone semi-leaked the news on the syracuse.com TV/radio forum, but user "Nabru" was juuuuust a bit outside the strike zone, claiming the Yanks would be moving to a different Galaxy property -- ESPN Radio 97.7 and 100.1.  The ESPN stations have aired the New York Mets for the past two seasons, and with espncny.com still displaying the Mets' logo among the teams it carries, we presume the Amazins' will remain there.

In a press release, Levine said he's "thrilled and honored to partner with the greatest brand in all of sports."  He also pledged to "go far beyond just broadcasting the games [by enhancing] the experience for Yankee fans in Central New York in a myriad of innovative ways, as we have done in our partnership with Syracuse University athletics."  While specifics weren't mentioned, it's a safe bet those enhancements will be the responsibility of the "Sports Marketing Division" that Galaxy launched in October.

CBS Radio VP of Sports Programming Mark Chernoff credited Galaxy with demonstrating "a great ability through their work with SU Athletics to enhance what is already a strong presence in Syracuse and make it bigger and better.  We look forward to that continuing with the Yankees."

The new partnership means Yankees fans will no longer need to check their watch before they tune-in a game.  For the past several years, Clear Channel split the games across two of its stations.  NewsRadio 570 WSYR was the primary affiliate, but the station could only carry night and weekend games.  Day games that conflicted with Rush Limbaugh's non-pre-emptable 12-3pm program were bumped to sister station 620 WHEN -- with the exception of the 2011 season, when Clear Channel Syracuse didn't air any day games.

It's not clear whether Clear Channel simply chose not to renew with the Yankees, or if any kind of a "bidding war" ensued between the companies.  After hearing the buzz that the Yankees would not be returning to WSYR next season, CNYRadio.com contacted program director Aaron Trimmer to get his side of the story.  As of this writing, Trimmer has not responded.