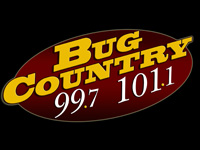 The station officially announced it on its Facebook page this morning:

Added 12/10 -- Bug Country owner Roser Communications Network is so pumped-up about picking up Herkimer, the station is running spots on local TV, even though the fall book ended last Wednesday.  From the Bug Country Facebook Page, this spot is airing this week:

And this spot will be airing next week, by which time Herkimer will be back on the air:

The station says it realizes Facebook fans (and of course, readers of CNYRadio.com who saw this story when it first appeared yesterday) are already in the know.  The TV spots are obviously geared toward the many who aren't aware of of Herkimer's new radio home.

By the numbers, the Facebook page for Big Frog 104 has over 19,000 likes, compared to Bug Country's 2,810 as of this writing.  And in the Nielsen Audio ratings for the semi-annually surveyed Utica-Rome market, WFRG has been the #1 station overall for at least the last 6 books in a row.  The station earned a 15.7 share in the Spring 2013 survey, compared to Bug Country's 2.5, among Persons 12+.