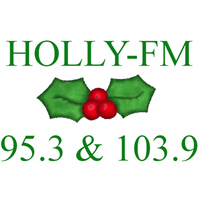 Updated 11pm-- SYRACUSE -- As expected, two radio stations that launched an all-Christmas format on the unusually early date of October 5 have changed their tune.  The former "Holly-FM" stations 103.9 (WNDR Mexico) and 95.3 (W237AY DeWitt) are now playing non-stop Beatles tunes.  And it looks WMBO 1340 Auburn is joining the two FMs in stunting for whatever's coming next.

CNYRadio.com readers stretching from Auburn to Rome wrote in to report hearing the change, which apparently took place at or shortly after midnight.  Although liners between the songs are branding the station as "WBTL," there haven't been any call sign changes filed with the FCC.  The surefire way to identify a station is to wait for the top of the hour legal ID.  Here's what we heard at approximately 8:00am:

As heard in the aircheck, the official legal ID is "WNDR Mexico Syracuse, WOLF-FM HD3 DeRuyter... 95.3, 103.9, WBTL."  Per FCC regulations, the shortest form of a true legal ID consists of a call sign immediately followed by the station's community of license.  Stations can say anything they want before or after.  Notice that WBTL is not followed by a community of license -- those aren't really call letters, but simply a "name" for the station, just as "Holly FM" was the name up until yesterday.

Still no word on exactly how much longer the stunting will continue, or what the new format will be.  But there are a couple of strong clues out there.  RadioInsight.com, which covers radio news nationwide, has a knack for tracking new internet domain name registrations that look like they could be intended for radio stations.  Earlier this week, the site reported station manager Sam Furco has recently registered dinosaurradio.com and realcountry103.com.