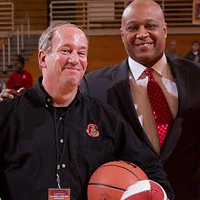 ITHACA -- Longtime Cornell University sports broadcaster Barry Leonard celebrated a notable milestone last month.  Twenty-two years into his tenure as "the Voice of the Big Red," Leonard was recognized for calling his 1,000th game on the radio.

Among the highlights from 22 years of calling Cornell basketball games, Leonard specifically recalls following the team's epic run to the Sweet 16 in 2009, a game played against Kentucky at the Carrier Dome in Syracuse.  For the past 19 of those seasons, Leonard has also been calling Cornell football and lacrosse games.

Our thanks to Barry Leonard for sending in the above photo -- and our congratulations!  Here's to 1,000 more games.

Picture of the Week is fueled by submissions from readers like Barry Leonard. Your photo could be next! We're always interested in a look at what's happening today at your local radio or TV station -- or a blast from the past! Email those photos to cnyradio@cnyradio.com or upload via our Contact Form. Thanks to your submissions, there's a new Picture of the Week every Friday at 7:00am.