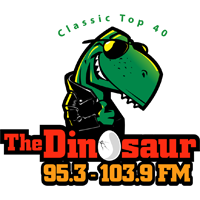 Updated 1:30pm to include additional info and audio: SYRACUSE -- "The Caveman" has left the building... and so has his news anchor. Nick Caplan, longtime PD and morning host of 95.3/103.9 The Dinosaur (WSEN) announced today was his last day at the locally-owned classic top 40 station. Across the studio desk, news anchor Chris Weidman said he's been contemplating retirement for some time, and Caplan's exit prompted him to hang up his headphones as well.

Caplan had been with the station since the format launched in January 2014. He said he's moving to Florida "for good." We hear he's all packed and ready to hit the road tomorrow morning, with plans to arrive at his new home in the Sunshine State by Sunday evening.

In the 7½ years since Caplan launched The Dinosaur, the station has steadily grown its audience. In CNYRadio.com's most-recent report on Syracuse radio ratings, WSEN ranked #3 among all listeners age 12 and up.

Weidman had been anchoring news for the past few years, returning to the airwaves after a break following his exit from a long run anchoring mornings at Newsradio 570 WSYR.

Near the end of this morning's broadcast, Weidman commented that the pair had been planning their departure for "several months." Weidman explained he has had another job all along -- even since before departing WSYR -- and it's been getting more difficult for him to keep up with both jobs.

Added 1:30pm - Caplan contacted CNYRadio.com to explain the exit was planned for "several months" because of the many events and causes he has supported with The Dinosaur over the past several years -- such as the Hammond Jammin', the Veterans Watchfire and others. Caplan says he didn't want to break any commitments to the various organizations that run these events. By this time of the year, all of the summer events are over, and commitments hadn't yet been made for anything in 2022.

Added 1:30pm - Here's scoped audio of Caplan and Wiedman's final 15 or so minutes. Songs and commercials are removed, but Caplan took about 4 minutes to thank a long list of people, including a variety of frequent morning show guests, the station's current and former jocks, along with various members of management including Sam Furco and station owner Craig Fox. He also thanked his parents as well as Don Brown, who hired Caplan for his first radio job 45 years ago.

No word yet on who will be hosting mornings come next Monday. We'll update the story when time permits, if we learn more.

3 comments on “The Dinosaur's Caplan and Weidman Bid Farewell [UPDATED]”