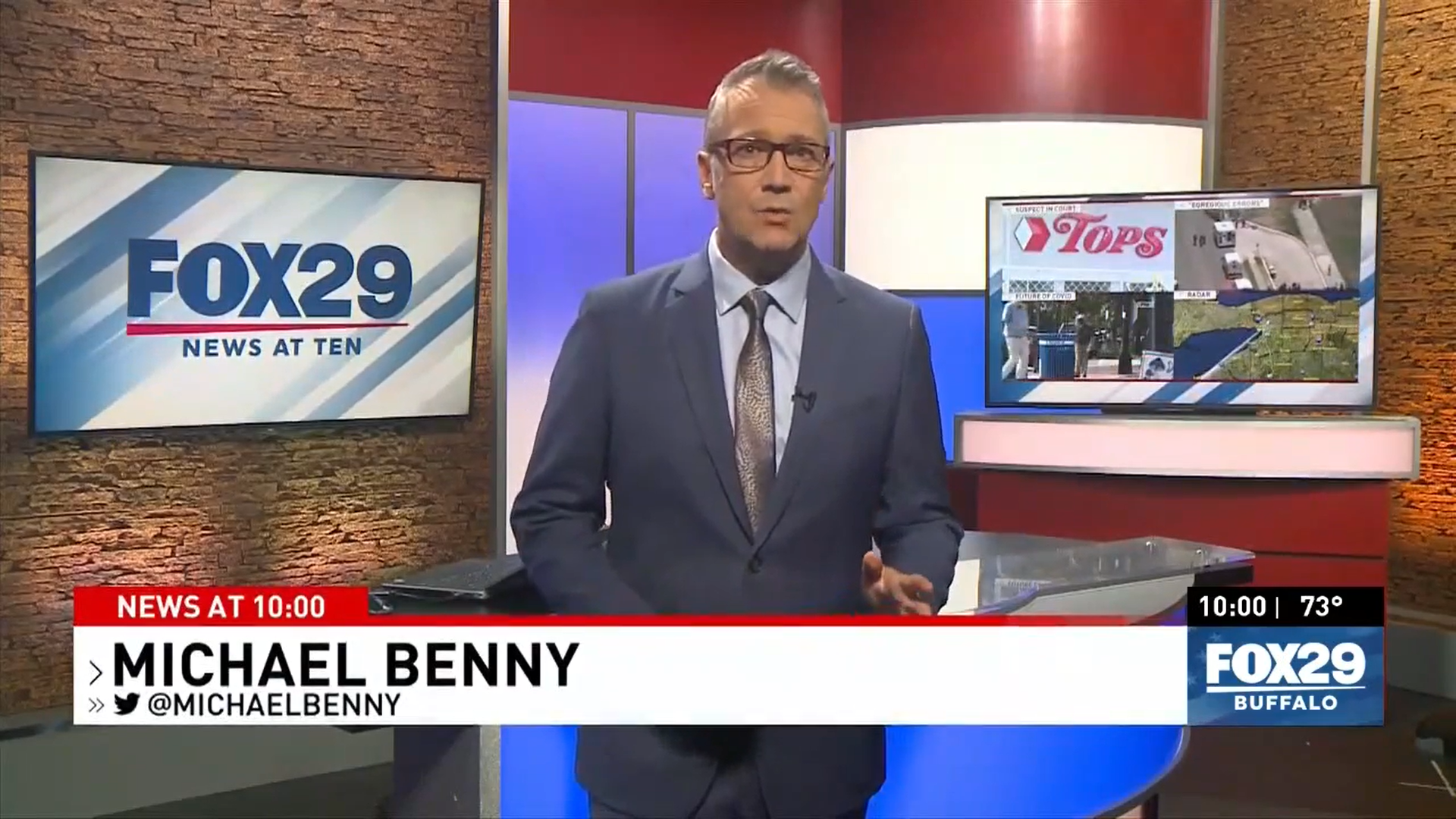 SYRACUSE -- Between anchoring CBS5 (WTVH) from 5-6:30, the NBC3 (WSTM) News at 7, and then being back on CBS5 at 11pm, you'd think Michael Benny's evenings were already pretty busy. But for a little over a year, he's been moonlighting in Buffalo, anchoring the Fox 29 (WUTV) News at Ten -- joined by a meteorologist and a sports anchor from Rochester's WHAM-TV. It's all possible through modern technology and the fact that all of these stations are owned by the same company.

Thanks to a CNYTVNews.com reader who recently said they spotted Benny on Fox 29 during a recent trip to Buffalo. We had no idea about the arrangement, but were surprised to find the Buffalo News reported on it last June, when it started.

Before then, WUTV's newscasts were produced by another station in Buffalo, similar to the arrangements that used to be in place about 20 years ago, in which WSTM produced the "Fox 68 News @ 10" for WSYT here in Syracuse. (You might recall, when WSTM lost the contract to then-competitor WTVH, the NBC affiliate remained in the 10pm news race by launching the "Action News at 10 on UPN-6" on recently-launched WSTQ-LP, which eventually became the present-day "CW6 News at 10.")

You might wonder, how can Michael Benny get back and forth between the two cities so quickly? He doesn't need to. In the WUTV screenshot above, the studio might look familiar -- Benny's standing in the same studio where he anchors for WTVH. Presumably via a dedicated Ethernet link, the video makes it from Syracuse to Buffalo almost instantly -- faster and cheaper than a satellite dish uplink would allow.

It's technology that's been in use for quite some time, though not usually for local newscasts. For example, when Channel 9 (WSYR-TV) was known as WIXT and owned by The Ackerley Group, it became one of the first master control "hubs" in the country, serving Ackerley's stations (mostly ABC affiliates) in several upstate markets including Utica, Binghamton, Watertown, Elmira and Rochester. Although most network programming, local commercials, and syndictated programming was "fed" to these markets from Syracuse, stations still produced their own local newscasts in-house.

Today, that's still largely the case with bigger TV companies like Nexstar (which now owns channel 9) and Sinclair (which owns NBC3 and CW6 and operates CBS5 through a shared services agreement). Across town, public broadcaster WCNY runs master control for "all nine PBS stations in New York, the state of New Jersey, WHYY in Philadelphia, WTVI in Charlotte North Carolina, PBS Hawaii, WITF in Harrisburg Pennsylvania, and several other stations totaling nearly 100 streams of television content." From here in Syracuse, WCNY says its Centralcast master control center "serves more than 43 percent of the nation’s PBS viewership across the United States."

By "hubbing" master control for multiple stations in one location, station groups can trim their payrolls. Rather than each station needing its own dedicated team of master control operators, a smaller group of MCOs in Syracuse can handle master control for all of these stations from a single location. That means more pledge drive dollars can be devoted to producing content, and less of it needs to be spent on local station overhead.

It appears Sinclair is now applying that theory to local newscasts. It's cheaper for Sinclair than hiring separate news, weather and sports anchors just for Fox 29, especially considering 10pm is the station's only local newscast. Sinclair doesn't own or operate a "Big Three" affiliate in Buffalo, so anchors would not be needed for any other broadcasts aside from 10pm.

Years ago, taking a "contracted out" 10pm newscast in-house would have required Sinclair to build a studio set, production control room and related facilities. That would be a big investment for just one hour of news per day. The arrangement with Rochester and Syracuse allows Sinclair to avoid those expenses and rather maximize the use of existing equipment and personnel in those markets.

The arrangement also sheds light on a recent job posting we've received from Sinclair, which stated a news producer for WUTV could be located in either Buffalo or Syracuse.

On a side note, we also confirmed a tip that NBC3 morning anchor Lisa Spitz was seen pinch-hitting over the weekend at another Sinclair station, WRGB in Albany. But, she was actually there in-person, as evidenced by live bantering on-set with meteorologist Craig Adams. They discussed how Spitz grew up in the area and turned the substitute anchoring assignment into an opportunity to visit family.

Chances are you know why WRGB needed the assist: that's where former WKTV / Utica anchor Heather Kovar was suspended after appearing "disheveled" and slurring her words on the air the previous weekend. Making headlines worldwide, Kovar claims she was suffering from exhaustion caused by working a double-shift (though the meteorologist who was also pulling double didn't seem to have any issues).

Kovar said her contract with the station ends on July 31 and she had already notified management, a day earlier, she would not seek a renewal. Management suspended Kovar the day after the infamous newscast, then later announced she would be kept off-air for the remainder of her contract.