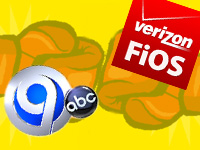 SYRACUSE -- Audiences who rely on Verizon FiOS for local TV are without ABC affiliate NewsChannel 9 (WSYR-TV) for a second week.  It's part of a nationwide dispute between Verizon and WSYR-TV's parent company, Texas-based Nexstar Media Group.

It's not a new issue -- the two companies have battled before.  (The image for this article was originally made for a similar dispute in 2012.) At issue are "retransmission fees," the amount Nexstar demands from FiOS for the right to carry channel 9's signal over its fiberoptic network.

Verizon offers a brief statement on its website, in part:

We are sorry that you are missing some of your favorite sports programs because of our ongoing dispute with Nexstar.

We have offered to extend our agreement with Nexstar but they have refused an extension. As of October 15, 2022, their channels are unavailable.

We will continue working with Nexstar to restore their programming to you as soon as possible. We know this is an inconvenience for our customers and we appreciate your patience.

The Verizon statement also suggests, during the outage, viewers can view Nexstar stations by using an over-the-air antenna for free, or by subscribing to paid services like YouTube TV or Hulu, among others.

Per FCC regulations, local broadcast stations have one of two options when it comes to carriage on cable, satellite, fiber or streaming providers.

They can invoke a "must carry" rule, which says the provider has to carry the station's signal, but the station gets no compensation.  This rule dating back to the 1980s was intended to ensure broadcast stations would not get "squeezed out" of cable lineups as the number of new cable channels often outpaced the capacity for local cable systems to carry them all.

Or, they can demand a "retransmission fee" from the provider, but in this case, the provider can refuse to pay if it doesn't like the price. If the channel requires a fee but the provider doesn't want to pay, the provider is no longer legally allowed to retransmit that station.

But Nexstar spins it the other way, claiming in a release issued October 13, that Verizon yanked it's stations from its lineups:

Verizon FiOS is refusing to reach a new distribution agreement allowing the cable company the right to continue airing the highly-rated programming on Nexstar’s local stations.

Nexstar remains hopeful that a resolution can be reached quickly to return to viewers their favorite network programming, NFL football, in-depth local news and other local content relevant to their communities, and critical emergency updates for which Verizon FiOS is charging its subscribers.

A story on Fierce Video quotes an industry analyst who estimates Nexstar collects a little over $4 per month per subscriber, for programming that's already ad-supported and available for free over the air with an antenna. Those fees added up to more than $377 million for the 2nd quarter of 2022.

If the outage lasts much longer, the story proposes the dispute could do more damage to Nexstar than Verizon, as political candidates often ramp-up ad buys heading toward the midterm elections. Candidates may not be willing to pay as much for ad time if the FiOS chunk of the viewing audience won't be seeing those ads.

As it stands, FiOS subscribers who couldn't find an alternate way to watch ABC were blocked from watching today's college football game between Syracuse and Clemson.