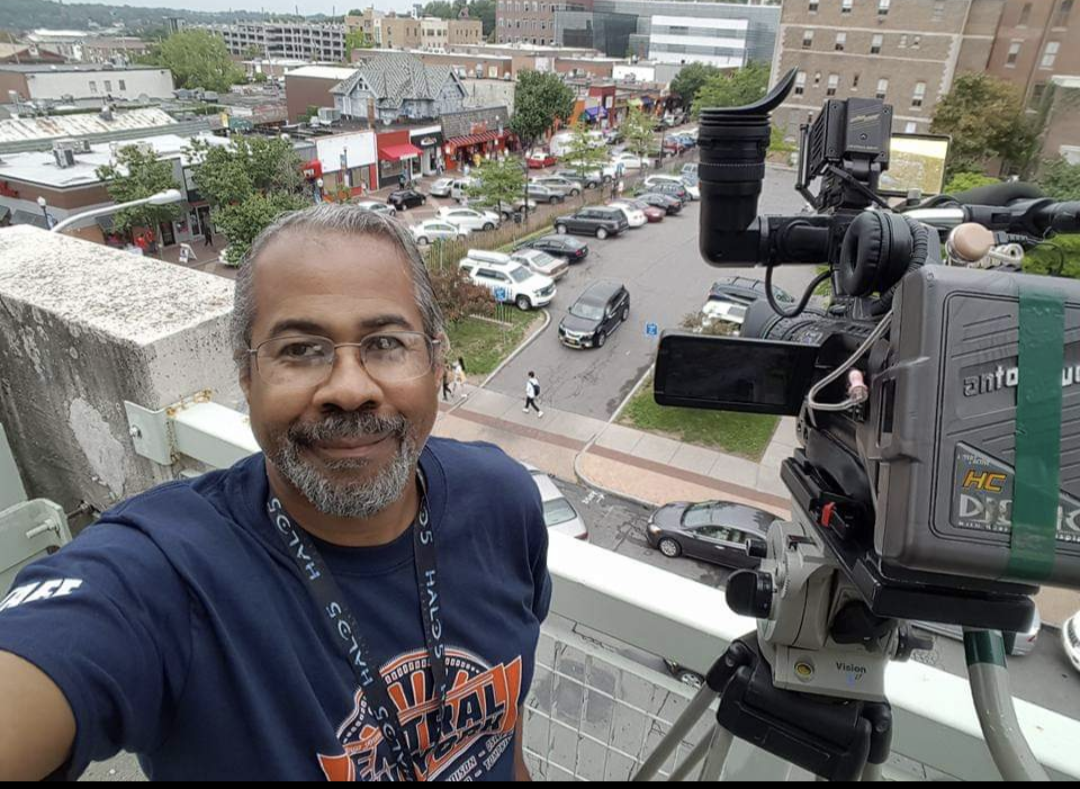 [Updated 11/8 with arrangements and obituary] SYRACUSE -- It's a sad day for the local TV news community: after battling cancer for more than a decade, longtime NewsChannel 9 (WSYR-TV) photojournalist Eddie Jones passed away on Sunday. Throughout it all, he maintained the positive attutide many knew him for, and continued to work, punching the clock as recently as last week.

[Click here to skip to arrangement details and obituary info]

Jones' family announced his passing on Facebook on Sunday afternoon. He was 66 years old. Although photojournalists usually spend most of their time behind the camera, rather than in front of it, Eddie was well-known in the community for his professional and upbeat demeanor.

Your editor worked alongside Eddie at channel 9 for a few years in the mid-2000s. While I worked overnights to produce the morning newscast, Eddie had been on the evening shift, usually on-duty until 1am, always ready to re-purpose video from the 11pm newscast, or to run out on a moment's notice to grab any spot news we caught on the police or fire scanners. There were several times Eddie heard things on the scanners before I did, especially when I was still new and getting accustomed to the "scanner lingo" of Onondaga County.

I recall first learning about Eddie's health battle when he won the Kershaw award in 2011. I had left the station 2 years earlier. At that year's Syracuse Press Club's awards dinner, then-WSYR-TV News Director Jim Tortora accepted the award for Eddie, explaining his absence was due to all the intensive treatments he had been going through.

Since then, Eddie would share updates on Facebook along the way -- always positive, regardless of ups and downs, all sorts of travel to see specialists in other cities, and having to navigate his way through the early stages of the pandemic with a compromised immune system. Battle after battle, Eddie would keep fighting and keep winning.

Just a few weeks ago, on October 19, Eddie shared a video with his friends on Facebook, announcing that his cancer had spread to the point where treatments would no longer help. "Don't know how long I have. But you know me, I'm living every day as if it's the last day," he wrote. "Love you all."

"Eddie was more than a colleague and a co-worker. Anyone that ever got to know Eddie or work with him knows he was truly a special person with the most positive attitude and outlook on life. He really cared and took pride in everything he did both personally and professionally. He touched all of at NewsChannel 9 and we deeply miss him."

Edward Jones leaves behind his wife, two daughters and a grandson. And countless colleagues who've learned a thing or two about the local TV news business.

Eddie's obituary has been published: calling hours will be held Saturday, November 12 from 1-4pm, with a service to follow at 4pm, at New Comer Funerals, 705 North Main Street in North Syracuse.

In lieu of flowers, memorial contributions can be made in Edward’s name to American Cancer Society Hope Lodge Jerome L. Green Family Center, in New York, NY or Moyers Corners Fire Department, where Eddie served as a volunteer firefighter.