WATERTOWN -- Today, tune to 1410 AM in Watertown, and you'll hear ESPN Radio programming on WNER.  But decades ago, the station was known as WOTT, and one former staffer saved some priceless tidbits from that time.

We found this week's Picture of the Week on Jerry Reed's own website.  You may recall Jerry worked for a few different stations throughout the region, founded the Northeast Farm Network and served in other capacities in radio and/or agriculture before landing at his current postion in media relations at the Oneida Indian Nation in 2001. 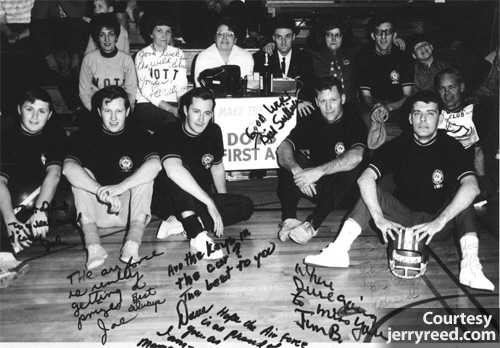 For some time, Jerry worked at "WOTT Fun Radio," as it was called back then.  This is a group photo from a January 1967 basketball game between WOTT staffers and the Watertown School of Commerce.  The caption as seen on Jerry's "Radio -- The Early Days" web page:

After seeing his photo featured here, Jerry writes to tell us he remembers, "I made a whopping $1 per hour (and all the free records I could haul home). I couldn't believe it myself so went back and looked at my Social Security earnings from 1966 and divided that by 52 weeks. Yup, right on at just under $40 per week. Yikes."

Got Pictures?
We're always interested in a look at what's happening today at your station,  or a trip back in time to something notable from the past.  Just e-mail your pictures to cnyradio@cnyradio.com -- or upload them through our Contact Form.  There's a new Picture of the Week every Friday... or we should say almost every Friday -- we've fallen a little behind lately, but your submissions can help us avoid that!