SYRACUSE -- It's one of the few places where you can count on seeing plenty of broadcasters together in one place every year: the Great New York State Fair, which opened yesterday in the Town of Geddes, just outside of Syracuse.  In this "Mega Picture of the Week," here are all the stations we found during a quick swing through the fairgrounds on Opening Day.

In the order we spotted them: 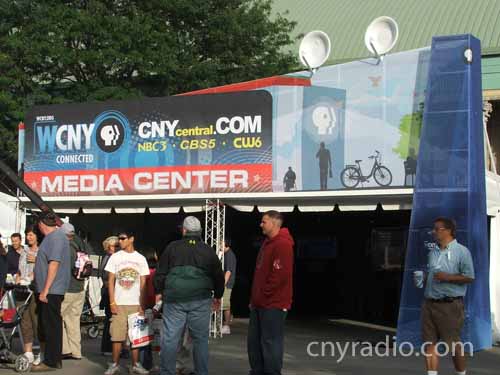 A very interesting scene this year between the Center of Progress Building and Chevy Court: WCNY-TV and Classic FM have joined forces with NBC 3 (WSTM-TV), CBS 5 (WTVH-TV) and CW6 (WSTQ-LP) with one centralized location branded as a "Media Center."  Most of the booth appears to be promoting WCNY-TV, rather than Classic FM.  When we stopped by, meteorologist Wayne Mahar was presenting his forecast live from the Fair, while reporter Jim Kenyon signed autographs.  Mahar's sidekick, "Doppler the Weather Cat," was also present. 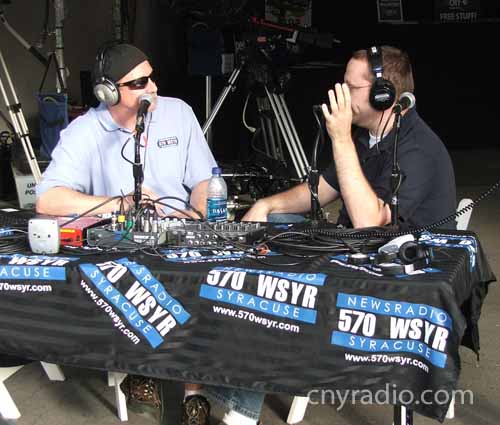 The Media Center is also where WSYR's Jim Reith (left) will be hosting his afternoon talk show almost every day during the Fair.  (He did mention earlier this week that he will occasionally be hosting the show from the Amos Project booth inside the Center of Progress Building.)  When we stopped by, Reith was talking to former producer Dan McIntyre, who yesterday announced he's running on the Democrat line for Town of Clay Supervisor. 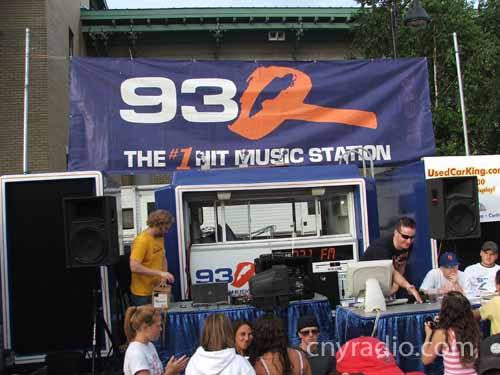 The next station we happened to find was Citadel CHR 93Q (WNTQ), set up in the relatively narrow and busy walkway between the Dairy Building and the Pepsi International Building.  Evening jock Mike Cauchon was on hand, inviting listeners to sign up for a contest to win concert tickets. 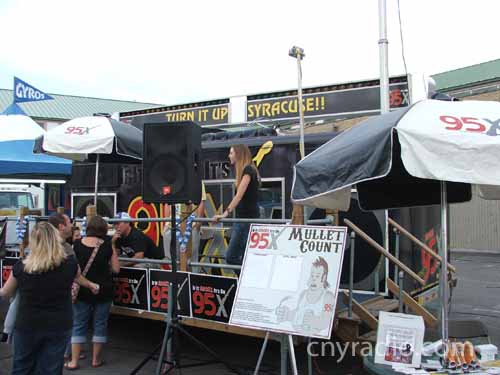 Not too far away we found one of 93Q's sister stations: rocker 95X (WAQX) is located along the well-traveled walkway used by concertgoers headed down to the Mohegan Sun Grandstand every evening.  Even if you're not headed to any concerts, this same walkway leads to other attractions like the wakeboarding demo, the wine tent, and the historic train exhibit. 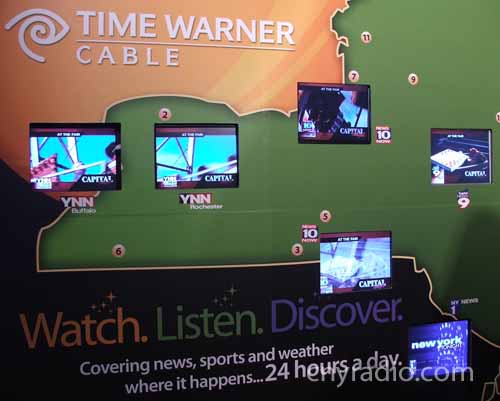 No, this isn't radio -- it's TV.  But we thought it was neat to see Time Warner promoting the State Fair virtually statewide.  A display inside the Time Warner Science & Industry Building shows live monitors of all six local cable news channels.  The nightly show "Capital Tonight" is simulcast on every channel except NY1 in New York City -- you can see the show's cold open running on the 5 participating channels (some are slightly delayed behind others). 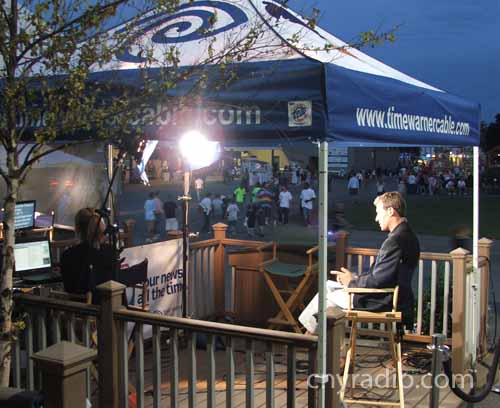 No matter which market you're in, if you've ever stumbled upon Capital Tonight, you might recognize this guy: Brian Taffe, who normally hosts the show from Albany, was live in Syracuse on Thursday night.  (We're not sure if he'll be at the fair for all 12 nights, or if he was only here Thursday because the Governor was also in town.)

Did We Miss You?
Earlier this month, we invited stations to let us know where you're going to be.  If we didn't hear from you, it was pretty much left up to chance -- we took pictures of every station we saw in the areas we happened to be walking around, but we didn't have time to scour every inch of the place.  (For example, we spotted a vehicle for one of the Clear Channel stations in the parking lot, but never saw their display... so we know we missed some of you!)

Luckily, you have a second chance: We'll be at the Fair again this Sunday... so if we didn't get you this week, we'd be happy to grab a picture of your station display on Sunday for a "Part II" next week.  Contact us ASAP and let us know where you're located.  Once again, we won't have time to cover every single walkway at the fair, so if you do us a favor and let us know where you are, we'll do you the favor of including your picture right here next Friday.