WATERTOWN -- Anyone who's been in radio more than 10 years probably remembers when there used to be such a thing as the overnight shift.  Back before computers eliminated the need for someone to manually load CD players and cart machines... 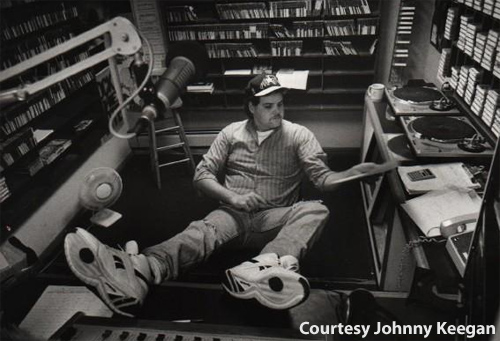 This week, a picture of Johnny Keegan... which he probably he forgot that he submitted to us back in July.  Keegan didn't say exactly when this was taken, but based on some other photos he submitted at the same time (which were featured here back in July), we're guessing this comes from the early 1990s as well.

Keegan says this was taken at about 2:30 in the morning, "back when radio was 24 hours!"  And it's evident the studio was still run manually -- as the jock is surrounded by countless racks of CDs, carts, and even what appears to be some vinyl.

We're always interested in what's happening today at your station or a look at something notable from the past.  Don't be bashful -- there's none of that in radio!  Send your pictures to cnyradio@cnyradio.com with a description of what's going on in the picture.  There's a new Picture of the Week every Friday... and it's a hungry beast to feed, so keep those great submissions coming along!

See more posts about: Johnny Keegan, Picture Of the Week