ITHACA -- For nearly sixty years, listeners tuning in to News-Talk 870 WHCU may have heard the voice of Barbara Hall, the station's longtime Women's Editor. We're sorry to hear word from Ithaca of Hall's passing on Tuesday at the age of 89. 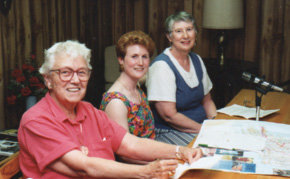 According to retired longtime WHCU general manager Rudy Paolangeli, Hall joined the staff of WHCU "right after graduation from Cornell in 1948. For years, she hosted a daily music and interview program from 10am-12noon."  She also co-hosted a program called "Nightwatch" with Don Martin, weeknights from 7-9pm.

Paolangeli says most people might remember Hall best for her weekend Travel Talk program, where she interviewed "nearly 1,000 local travelers about their trips." He says Hall's final broadcast was in 2007.

Frequent visitors to CNYRadio.com might recall reading about Hall here less than a month ago -- in our November 18th edition of "Picture of the Week." Hall was one of several WHCU staffers to gather for a photo at WHCU's 70th anniversary celebration in 1993.

As of Wednesday evening, only a brief notice appeared on the Ithaca Journal website, with no details regarding arrangements.  Our condolences to Hall, her family and her colleagues.