SYRACUSE -- Can you name all the Channel 3 (WSTM) news staffers in this photo from nearly 25 years ago?  It's just one photo from an entire album of archived photos entitled "CNY Central History," posted online earlier this week. 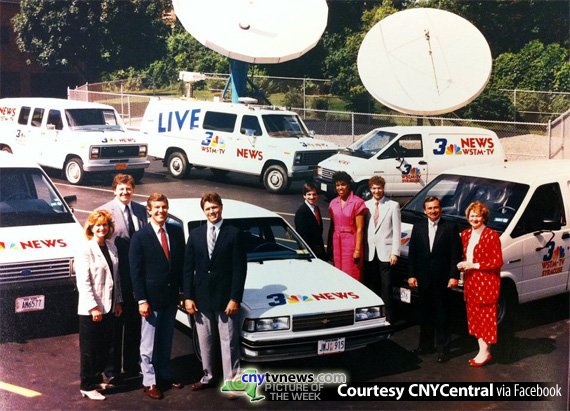 Starting with the group of four on the left side, your editor is taking a guess that's former sports director Roger Springfield in the gray suit, and chief meteorologist Wayne Mahar on the right.  Among the group of five on the right, we recognize Jackie Robinson in pink, and Laura Hand in red.

The picture is one of nearly 80 in a new album on CNY Central's Facebook Page which appeared on Wednesday.  Some of the photos, print ads and newspaper clippings (dating back into the 1950s) have captions, but the one above did not.  So far, most of the photos appear to be from WSTM's history; since the album is called "CNY Central History," hopefully we'll eventually see some WTVH-related items added to the collection.

Back to the above photo... were we right on our guesses?  If you have any corrections or additions to the list, feel free to post a comment below -- immediately below if you're logged into Facebook, or a little farther down the page if you're using (or registering for) a free CNYRadio.com login.

It's not often we feature photos from the same station two weeks in a row -- it wasn't planned that way, but when we spotted that album of vintage photos, we couldn't resist.  Of course, reader submissions usually skip right to the front of the Picture of the Week line, so if it's been awhile since you've seen anything from your station here, just send something in!  Whether it’s something recent, or a “blast from the past," as long as it involves local radio or TV, we're interested.  Send those shots tocnyradio@cnyradio.com or upload via the Contact Form.  There’s a new Picture of the Week every Friday.