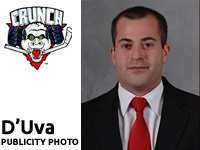 SYRACUSE -- The Syracuse Crunch, the AHL team which recently switched its NHL affilation from the Anaheim Ducks to the Tampa Bay Lightning, have named Dan D'Uva as the team's new radio voice.  D'Uva replaces Jason Lockhart, who called the team's games for the past two seasons.

An announcement today from the hockey team included an endorsement from NBC sports lead NHL announcer Mike Emrick.  He says D'Uva "comes to the Crunch with a wealth of experience for someone so young."

D'Uva attended both Syracuse University and Fordham University.  His most-recent play-by-play experience includes working for the ECHL's Trenton Devils from 2009-2011.  He also has experience calling baseball, logging six seasons with the Chatham A's of the Cape Cod Baseball League.

The Crunch home opener this season will be October 13 and the games will be carried on The Score 1260 (WSKO).  While the press release announcing D'Uva's arrival only mentioned radio, it is expected that a handful of games will also be televised by Time Warner Cable Sports, as has been the tradition in previous seasons.