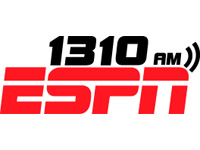 UTICA/ROME -- The long-anticipated arrival of ESPN Radio on the FM dial in Utica is a step closer to reality. The FCC recently approved a request to move translator W256AJ from the roof of Hotel Utica to a more advantageous perch atop Smith Hill.

The Commission officially approved the "Minor Change to a Licensed Facility" application on June 28, but the decision didn't make it into the FCC's "Daily Digest" of rulings until this week.

Hotel Utica is located in a relatively low-lying part of the city. According to FCC records, the original location for the W256AJ transmitter is more than 35 meters below average surrounding terrain.

Although that height may have been satisfactory for Christian Broadcasting System, the former owner of W256AJ, Syracuse-based Galaxy Communications announced its intent to move the transmitter location at the same time it revealed its plans to buy the translator and use it to simulcast its three ESPN Radio stations on the AM dial (WTLB/Utica, WIXT/Little Falls and WRNY/Rome).

The May 17 application to move the signal was filed by Christian Broadcasting, since the sale to Galaxy had not yet been finalized at the time. The sale officially closed on May 31, according to FCC records.

In the application requesting the move to Smith Hill, engineer Charles "Bud" Williamson demonstrated that the relocation of W256AJ would cause very little or no interference with second-adjacent channel WLZW at 98.7FM or third-adjacent channel WBGK at 99.7FM.

Since Galaxy took control of W256AJ, the translator has been simulcasting classic rocker 96.9 WOUR. There's been no word yet on the exact date for the 99.1FM frequency to begin simulcasting WTLA's ESPN Radio programming.