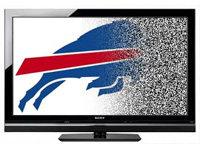 SYRACUSE and UTICA-ROME -- When the Buffalo Bills begin their pre-season schedule at home tomorrow, Central New York fans who want to follow it live will have only one option: radio. Syracuse CBS affiliate WTVH was going to air the game live, but it's been blacked-out.

CNYCentral.com, the website of WTVH, says channel 5 will air the game on tape delay, on Saturday night at 11:00.  The Bills will host the Washington Redskins.

The blackout is an NFL rule, not a TV station decision: anytime a home team's stadium fails to sell enough tickets to reach a pre-determined "blackout threshold," TV stations in or near the team's home market are forbidden from airing the game live. The rule is intended to encourage fans to buy tickets and watch games in person.

For many years, the NFL set the threshold at 100%. This year, teams were given the option to set their own thresholds, as low as 85%, in an effort to reduce blackouts. However, the Buffalo Bills announced in July, that they would be staying with original 100% sellout requirement for this season.  (That July article also explains why Syracuse is considered "local" by the NFL, despite being 150 miles away from Buffalo.)

Radio, on the other hand, is not subject to blackouts.  TK99 and TK105 (WTKW/WTKV) in Syracuse and 96.9 WOUR in Utica will be airing all Buffalo Bills games through the preseason and regular season.

According to Buffalo Business First, more than 20,000 seats for tomorrow's game remained unsold as of Tuesday morning.  Considering "The Ralph" has 73,079 seats, the game would still be blacked-out even if the Bills had lowered the threshold to 85%.

Because Utica doesn't have a CBS affiliate of its own, WTVH is supplied on cable lineups there.  As a result, any game blacked out on WTVH means the blackout affects both markets.