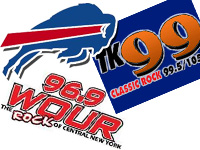 Updated 6/22 -- SYRACUSE and UTICA-ROME -- After a ten-year affiliation with The Score 1260 (WSKO) in Syracuse and one season with WUTQ in Utica, the Buffalo Bills will have new affiliates in both markets this coming season. Galaxy Communications has inked a deal to carry the games on TK99/105 (WTKV/WTKW) in Syracuse and Oswego, and on 96.9 WOUR in Utica.

While both stations are predominantly focused on classic rock, the occasional switch to sports is nothing new -- for years, TK99 has been the flagship station of the IMG/Syracuse University athletics network, and WOUR carries the games as well.

"This is a great opportunity for both the Buffalo Bills organization and our fans," said Syracuse native and Bills Chief Executive Officer, Russ Brandon, in a press release. "TK99 is the station fans turn to for local Syracuse sports, adding the Buffalo Bills to their line-up enhances both of our brands."

"We are proud to be the new home of the Buffalo Bills," said Ed Levine, Galaxy Communications President and Chief Executive Officer. "We take a lot of pride in bringing our listeners the best live local and regional programming, the Buffalo Bills radio broadcasts will certainly add another great option for our listeners."

The announcement says the affilation deal includes not only the game broadcasts, but pre- and post-game coverage along with "player and front office programming."

A similar arrangement exists in Utica, where PD Gene Conte from Galaxy's ESPN stations there (WTLB, WIXT, WRNY) says the three AM stations and a future FM translator will also continue to carry the two teams who share MetLife Stadium at the Meadowlands.

Dating back through at least the late 1990s, the Buffalo Bills Radio Network was operated by WSKO's former parent company, Citadel Broadcasting. Cumulus acquired Citadel late last year, and once the Bills had completed their season, Cumulus announced it would not be renewing its deal with the Bills. Subsequently, the network rights were picked up by Entercom. While affiliate changes were automatic in Buffalo and Rochester -- where both Cumulus and Entercom operate stations -- it was not known until today whether this change would ultimately affect Bills coverage in the Entercom-free markets of Syracuse and Utica.

As reported here previously, preseason coverage begins August 9th as the Bills host the Washington Redskins for a 7:00pm kickoff.  The Bills regular season schedule begins September 9th, on the road against the New York Jets.  With one radio on TK99 and one radio on ESPN, curious listeners will have the opportunity to hear both teams' broadcasters covering the same game.

Thanks to CNYRadio.com readers who caught the announcement on TK99 this morning and emailed us, allowing to get the ball rolling on tracking down all the details we needed to get this story together.  Anytime you hear of something newsworthy in local radio or TV, we're grateful to hear from you at cnyradio@cnyradio.com or use the Contact Form.