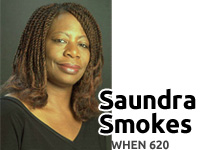 Updated 7:45pm with more details -- SYRACUSE -- Journalist and radio host Saundra Smokes, who just started a new talk show on Power 620 (WHEN) in June, passed away today. According to published reports, Smokes collapsed in her home on Monday and died today after suffering a cardiac arrest. She was 57 years old.

Smokes appeared on her radio show, "Saundra Smokes Speaks on Venus," just this past Saturday. It was only the sixth episode of the hour-long weekly talk program, which debuted on June 30. WHEN program director Kenny Dees posted the following announcement on Smokes' profile page on the station's website:

It is with a very heavy heart that I must inform you of the passing of Saundra Smokes. She was hospitalized on Monday, and passed away this morning. In her time with Power 620, she made such a difference: bringing insightful, intelligent conversations to our listeners. We enjoyed each moment we spent with Saundra, and she will be missed by everyone here at the station.

Stay tuned to Power 620 and visit our website, we will keep you updated with how you can honor the memory of our dear friend Saundra Smokes. Please keep Saundra, her family, and her friends in your thoughts and prayers.

A report filed this afternoon by CNY Central's Michael Benny noted Smokes' many achievements, including being the first person of color to sit on the editorial board of a daily newspaper in Syracuse. She joined the Herald-Journal's editorial board in 1985, after -- according to her profile on the Syracuse Press Club's Wall of Distinction -- getting her start with the paper in the late 1970s as a "copy kid" and working her way up the ladder into more prominent roles. Eventually, Smokes became the paper's first full-time opinion columnist -- a position that drew the attention of United Features Syndicate, who ran her columns in more than 20 newspapers across the country for eight years. Smokes was inducted to the wall in 2004.

According to the Post-Standard, Smokes returned to the paper after her syndicated column ended in 2003, but then accepted a buyout offer in 2009 to spend more time with her family. She returned to the paper earlier this year as a guest columnist, and the radio show came along very shortly afterward. In addition to the many awards Smokes earned for her work, colleagues at the Post-Standard also praised her personality, her work ethic and her ability to bring various topics into the limelight.

As of Wednesday evening, a representative for Smokes' family told the newspaper funeral arrangements are still pending.