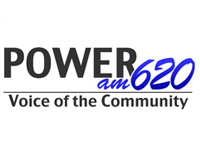 Updated 5:40pm with press release -- SYRACUSE -- Regular Post-Standard guest columnist Saundra Smokes is adding some radio to her writing duties. This Saturday, she'll launch a weekly one-hour talk show on Clear Channel urban-formatted Power 620 (WHEN). The new show will focus on topics of interest to women.

According to the Post-Standard, the show will be titled "Saundra Smokes Speaks on Venus," and it will air on Saturdays from 1:00 to 2:00pm. Smokes tells reporter Jennifer Thompson she noticed there aren't many women in prominent roles on the radio, and she noticed "an opportunity and a necessity" for a program to "prominently feature women's voices."

Added 5:40pm -- Here is a full press release we received from Clear Channel -- to their credit, they did send it a few minutes before we published the story, but we didn't catch it in our email until a little later:

“Saundra Smokes Speaks on Venus” Premieres THIS Saturday, 1pm on Power AM 620

Syracuse, New York – June 28th, 2012 - Starting this Saturday at 1 p.m., a new radio show, created and hosted by award-winning columnist Saundra Smokes, will hit air waves. Designed with women in mind, whose voices are often absent from talk radio, this unpredictable and thought-provoking radio show will air on Saturdays from one to two p.m. on Power AM 620. “Saundra Smokes Speaks on Venus” will give insight into local, state, national, social, political, religious, and cultural issues – as seen from a women’s perspective. Saundra’s goal is to connect with women of all ages and from all ethnic backgrounds. This Saturday’s show will feature a discussion on female leadership with Mayor Miner, County Executive Joanie Mahoney, and Chancellor Cantor. Saundra will also interview a Los Angeles talent manager about the death of Nora Ephron, and films in Hollywood.

“I’m excited about the live aspect of radio, it’s an adventurous media! Talking about one topic always leads to something else: you’re never quite sure how it will end up which is exciting. I like hearing different views, I may not agree but I respect other opinions. I like being a part of a lively, open-minded conversation,” says Saundra.

“Saundra Smokes Speaks On Venus” will be held in a variety of formats including roundtable-style, essays, interviews, and more. Each show will always weigh in on a topic in news or popular culture. Saundra Smokes is known for her introspective, conversational style of writing: she writes a bi-weekly opinion column on Sundays for the Post Standard. Now, she will be sharing her inviting, open-minded approach to women’s issues with the local community.

“As Power AM 620 is the Voice of the Community, it’s important that we represent all voices within our community. Saundra Smokes will ensure that women’s voices are heard through her innovative and unique show,” said Kenny Dees, Program Director of Power AM 620.

“To Power AM 620 and to the Clear Channel Syracuse family of radio stations, Saundra brings a wealth of experience, local and national contacts, and in-depth knowledge of current issues. I can’t wait to hear her first show and we’re thrilled that we can share her insightful conversations with our listeners,” said Joel Delmonico, Clear Channel Media + Entertainment Vice President and Regional Market Manager.

In addition to being broadcast on Saturdays from one to two p.m. on Power AM 620, “Saundra Smokes Speaks on Venus” can be heard through IHeartRadio.com (available on smartphones and for online streaming) and podcasts of the show will be available on PowerAM620.com.

ABOUT SAUNDRA SMOKES: Saundra Smokes was the first woman and person of color to serve on the newspapers’ editorial board. She won seven writing awards from the Associated Press and was a contributing opinion columnist at USA Today. Her columns have appeared in various newspapers around the nation, including in New York, Ohio, California, Indiana, Florida, Colorado, Massachusetts, and Alaska; and in Manhattan Woman’s magazine. Smokes is also an award winning playwright. Her column on the Columbine killings lead U.S Senator Ben Nighthorse Campbell to write her a personal letter; letting her know that she had written one of the best commentaries about the tragedy.

Anytime there's something new happening at your local TV or radio station, let us know!  Whether you've got a formal news release or just a quick, informal note with the specifics, cnyradio@cnyradio.com is the address -- or if you so prefer, use our handy Contact Form.

3 comments on “WHEN Taps Local Columnist for Saturday Talk Show”