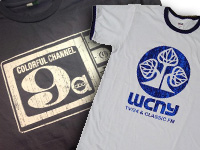 SYRACUSE -- If you spot people wearing t-shirts with vintage TV station logos at the New York State Fair this year, you're not seeing things.  Two local television stations will be "going retro" at this year's fair, which opens tomorrow and runs through Labor Day.

ABC affiliate NewsChannel 9 (WSYR-TV) is celebrating its 50th anniversary this year.  The official sign-on date was 9/9/1962.  And if you watch WSYR-TV's newscasts, you've probably caught one or more of Tim Fox's retrospectives on different shows and people who were a part of the station's history, dating back through the previous WIXT call letters, the old "Eyewitness News" branding, and even to the station's earliest days as WNYS, operating out of ShoppingTown Mall.

In honor of the anniversary, staffers will be wearing dark brown t-shirts featuring the original "Colorful Channel 9" logo on a vintage dial-tuned TV set.  The photo you see at right was posted publicly on Facebook earlier this week by NewsChannel 9 Digital Media Director Phil Rankin.  While anchors and reporters will be a little dressier, you'll spot plenty of production crew members in the shirts.  As in recent years, the station's mid-morning talk show Bridge Street will broadcast live from Chevy Court every weekday at 10am.  Weekday newscasts at noon, 5:00, 5:30 and 6:00 will also originate from the station's usual location just outside of the Dairy Products Building.  A blue version of the shirt will be available for sale.  The station will also be selling copies of its 2013 Storm Team Calendar, which will include a special "50th Anniversary Poster."

In a move that we're guessing is purely coincidental, public broadcaster WCNY-TV has a similar idea: they're going to be selling t-shirts with the old WCNY "tree" logo prominently displayed on the front.  WCNY-TV talk show host Jim Reith posted a photo on his own Facebook account earlier this week.  The will be available for sale at the "Media Center" WCNY shares with CNY Central, near the southwestern end of the Center of Progress Building.  If you just can't wait, you can order online.  The price is $18.00.

A Fair Reminder to Stations

We plan to continue our "State Fair Mega-Picture of the Week" tradition this year -- it'll run right here on Friday, August 31.  Before then, your editor will be at the fair on at least a couple of occasions, with the goal of eventually grabbing photos of every TV and radio station that has a presence on the fairgrounds.

We'd love to get 100% coverage -- so if you work in local TV or radio, make sure we know where your station(s) will be located... especially if we've missed you in the past, or if you may have moved to a new/different location compared to previous years.  A quick note to cnyradio@cnyradio.com is all it takes -- just let us know which building(s) or other landmarks you'll be near.  Thanks!