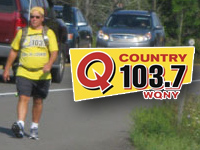 ITHACA/CORTLAND -- If you thought you had a long week last week, try walking a mile in Chris Allinger's shoes.  Or more like several dozen miles.  The Q-Country 103.7 (WQNY) morning host spent the week walking to every single town in Tompkins County, collecting donations to help combat child hunger in the county.  By the end of the week, he raised $15,800.

The money will be used specifically for Tompkins County children who qualify for the Food Bank of the Southern Tier's "BackPack Program."  The program found that many children from lower-income families usually eat breakfast and lunch only on school days, as these meals are provided at school.  When school isn't in session -- on weekends, holidays or longer breaks -- many children don't get these meals at all.  The Food Bank's BackPack program provides a backpack of easy-to-prepare foods to children on Fridays, so they have enough food to get through the weekend.

To draw attention to the cause, Allinger plotted a course and set out to walk through every single town in Tompkins County within the course of a week.  He wore a backpack the entire time, collecting donations in the backpack.  The walk started on Monday, from the Cayuga Radio Group studios northeast of the city center.  Each day from approximately 9am to 5pm, Allinger and his backpack were out and about, gradually making a counter-clockwise ring around the county, ending up back in Ithaca late on Friday afternoon.  The only mileage not covered by walking was a ferry ride on day two, bringing Allinger from Lansing, across Cayuga Lake, to Trumansburg.

Throughout the walk, Allinger hosted "collection parties," where he'd give his feet a break and let his voice do the work for awhile, broadcasting live to encourage listeners to stop by with a donation.

According to the Q-Country website, quite a contingent had formed to join Allinger for the final mile to his finish line at the Ithaca Commons on Friday afternoon, including his wife, several of his co-workers, various local dignitaries.  When the walk finished, Allinger estimated he had collected at least $10,000.

After everything was counted over the weekend, he announced the official total this morning: $15,818.  With each Food Bank "backpack" costing just three dollars, those donations will help provide nearly 5,300 backpacks to local children.  And according to Q-Country's website, that total may still go higher, as donations continue to trickle in.