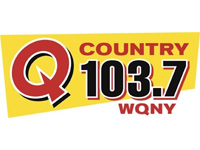 ITHACA -- Q-Country 103.7 (WQNY) morning host and PD Chris Allinger is logging plenty of miles this week, as he backpacks to every town in Tompkins County.  But he's not doing it for his own benefit: he's looking to see how many times he can fill that backpack with donations for the Food Bank of the Southern Tier.

Allinger left his morning show an hour early today, starting his walk immediately from the Cayuga Radio Group studios on Hanshaw Road in Ithaca.  He's walking all week long in support of the Food Bank's "BackPack Program," which, according to a press release, "provides healthy, child-friendly, and easy to prepare foods to children at risk of hunger over weekends and holiday breaks when children do not have access to free or reduced price school meal programs."  On Fridays, children in need are provided a bag of easy-to-prepare food to get them through the weekend.

"This is an important program that helps children that are going hungry right here in our community," Allinger said.  He's hoping his walk will raise money for the program and " to generate awareness about local childhood hunger."  Although the Food Bank serves a six-county area, Allinger says his walk is "specifically for Tompkins County" and all donations he collects "will stay here to fight child hunger."

The Q-Country website says Allinger's first day of walking took him northeast from Ithaca to Freeville, Dryden, McLean and Groton.  Tomorrow, he expects to head south to Lansing, then west to Cayuga Lake, where he'll ride a ferry to Taughannock Falls State Park, and continue west into Trumansburg.  Wednesday's walk will take him from there, south through Enfield and Newfield.  On Thursday, Allinger will continue to arc south of Ithaca, heading east through Danby and Brooktondale.  And on Friday, Allinger heads from Slaterville, back to Ithaca via Route 79.  He expects to reach the Ithaca Commons at 5pm.

Thanks to Connie Fairfax-Osmun at the Cayuga Radio Group for including CNYRadio.com on her distribution list for newsworthy items such as the above!  We welcome and encourage all TV and radio stations in our coverage area to do the same -- many others already do, but if you haven't yet, here's the address: cnyradio@cnyradio.com.  Whether you've got news for the national broadcast trades, or for other local news outlets in your market, we're always interested in anything you're sharing.