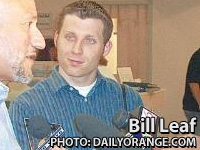 SYRACUSE -- If you've been considering forming or joining a team for the 7th Annial Bill Leaf Memorial Kickball Tournament, it's time to stop procrastinating and get going.  The tournament is set for September 22, but the registration deadline -- September 12 -- is just a week away.

The tournament has been held every year since 2006, when Bill Leaf, a former reporter for WSYR radio and WTVH television, was killed by a drunk driver who was going the wrong way on Interstate 81.  Leaf died instantly in the head-on crash.

Registration is $26 per person.  Teams require at least 8 people, at least four of which must be women.  The registration fee includes breakfast, lunch and a t-shirt.  Registrations are being accepted online -- you can register an entire team at once, or individual players can register separately as long as they indicate the team captain or team name during registration.

Bill's sister Maria, a former local broadcast journalist herself, tells CNYRadio.com that the registration deadline, originally September 7, has been changed to September 12.

The tournament begins at 10:00am, but players are encouraged to arrive at Onondaga Lake Park in Liverpool by 9:30am to have ample time to check-in and enjoy breakfast before their first game.  The better you play, the longer you stay, and the tournament is expected to wrap up by 4:00pm.

Organizers first got the idea for a kickball tournament based on a feature story Leaf produced about the adult kickball leagues hosted at Onondaga Lake Park and other parks throughout the county.  Proceeds from the tournament benefit the Bill Leaf Memorial Scholarship.  Each year, the SU Alumni Club awards the scholarship to someone like Bill Leaf -- a local native who is studying broadcast journalism at SU's Newhouse School.  Leaf graduated from Syracuse's Henniger High School prior to graduating from SU in 2002.

Since 2008, the tournament has also helped to support a scholarship at Liverpool High School in memory of Samantha Reynolds, a teenager who was also killed in a head-on crash involving a drunk driver.  She and her family were driving to Disney World for their spring break vacation in 2008.

Questions about the tournament can be directed to Jonathan Hoster at 315-443-5348 or BillLeafKickball@gmail.com.