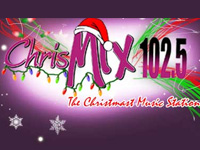 Updated 9:45pm to add link to Y94 poll -- SYRACUSE -- Less than a week after Sunny 102.1 (WZUN) made its annual switch to wall-to-wall Christmas music on November 1st, Utica-Rome sister station Mix 102.5 (WUMX) made the switch today, rebranding itself as "ChrisMix 102.5."  And in Syracuse, Clear Channel's Y94 (WYYY) is giving listeners the chance to decide when it will hop on the holiday cheer bandwagon.

Thanks to CNYRadio.com reader JMyrleFuller, who posted a comment on last week's story to let us know about the change at WUMX this morning.  We had heard though the grapevine that WUMX wasn't planning to "deck the halls" until next week, so this one caught us off-guard.  In previous years, Mix 102.5 usually made the switch at the same time as Sunny 102.1, so the fact that they didn't switch last week was also a bit of a surprise.

Back in Syracuse, political offices aren't the only thing up for vote today -- Y94 has created an online poll, asking listeners to decide when the Clear Channel AC will set aside its regular playlist to offer holiday tunes around the clock.  Among the options, listeners can urge the station to flip immediately, wait until mid-November, Thanksgiving Day, or Christmas Eve.

The poll is set-up so you can't see the results after voting, so there's no telling where the poll stands now, or whether the station will actually heed the poll or go with its own plans regardless of the results.  The poll page also has a space for listeners to request their favorite Christmas season song.