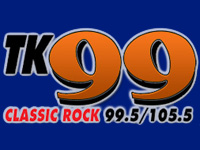 SYRACUSE -- Veteran local rock jock Alexis, who fell victim to budget cuts in 2009 after more than 15 years at 95X (WAQX) is making a return to the airwaves.  She's taking over the 7pm to midnight shift at Galaxy classic rock stations TK99 and TK 105 (WTKW/WTKV), the shift formerly held by Mimi Griswold, who recently retired after a 20-year run with Galaxy.

TK99/105 midday host and program director Gary Michaels made the announcement today.  He said ,"we have added more classic rock to our library and bringing Alexis aboard made sense, to help us build on our position at night."  As previously announced, Griswold hasn't fully retired -- she'll continue to host the "Blue Moon Cafe" on Sunday mornings for TK99/105 and Utica sister station 96.9 WOUR.

According to CNYRadio.com archives, Alexis already had 13 years under her belt at 95X when she was promoted to program director in 2003.  She gave up the PD stripes in 2008, and was let go from the station -- owned by Citadel Broadcasting at the time -- in early 2009.