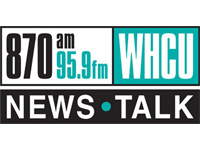 ITHACA -- On January 23, 1923, radio station WEAI signed on for the first time.  Two weeks from now, that station will reach its 90th anniversary... but it hasn't been called WEAI in decades.  Today, that station is News-Talk 870 WHCU.  Over the next couple of weeks, WHCU will be sharing plenty of memories from the station's long history.

According to a press release issued today, many "historical elements" will be featured on-air and displayed online during the coming days leading up to the station's anniversary.

Morning News Watch host Lee Rayburn said in the statement, "we are fortunate to have many signature audio elements and historical print pieces from our station history.  Legendary broadcasters like Rudy Paolangeli and David Stewart have generously offered many of their archived pieces from our station's rich history."

In addition to the on-air audio, Operations Manager Chris Allinger said numerous photographs and documents from WHCU's history will be displayed on the station's website at whcu870.com and on its Facebook page.  (In fact, the Facebook page already has a couple photos of current staffers posing with vintage WHCU coffee mugs, and a 1982 photo of Rudy Paolangeli in the studio; just scroll down through the timeline.)

Allinger said, "highlighting our 90 years of broadcasting the news is a tremendous tribute to all the great staff past and present that have made the station what it is today."

WHCU's call letters stand for "Home of Cornell University," the station's original owner and operator.  According to Wikipedia, all of WEAI's programming was educational in nature, until Cornell and the Elmira Star-Gazette teamed up to launch WESG radio in Elmira.  Although Cornell continued to own WEAI, the newspaper would handle operation of both stations until 1940, when the FCC ordered Cornell to take over day-to-day operations for itself, or surrender the broadcast license.  Cornell took back the station and it became WHCU.

Cornell would operate WHCU until 1985, when it and sister station WYXL (formerly WHCU-FM) were sold to Eagle Communications.  Eagle united the stations with WQNY (103.7FM) and WNYY (1470AM), and in 2005, the cluster was sold to its present owner, Saga Communications, which operates the cluster -- now seven stations large -- under the Cayuga Radio Group banner.

In 2010, WHCU's reach expanded to the FM dial.  In March of that year, Q-Country 103.7 (WQNY) started simulcasting WHCU programming on its WQNY-HD3 subchannel, available to those with HD Radio receivers.  A few months later, Saga made it possible for listeners to hear WHCU on the FM band without an HD Radio, by launching translator W240CB at 95.9FM.  Although the translator is technically licensed to simulcast WQNY, the arrangement passes muster because W240CB technically simulcasts the stream from WQNY-HD3.

Some might say WHCU can trace its Cornell roots back nearly a hundred years.  Wikipedia's history of WHCU mentions Cornell's School of Electrical Engineering launched experimental radio station 8YC in 1912.  But the Cornell Amateur Radio Club's website has a more-detailed accounting of Cornell receiving approval for 8YC to begin broadcasting in 1915.  The club says 8YC was using a 1kW spark transmitter, when a 1916 issue of QST reported reception of the signal in Hartford, Connecticut, some 400 miles away.