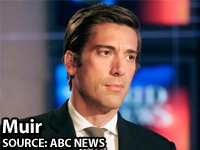 SYRACUSE -- For the second year in a row, Central New York native David Muir appeared on network TV news programs more than any other correspondent in the country.  During 2012, the former WTVH anchor's reports for ABC News clocked-in at just over 7 hours.  That's over 2½ hours more face time than 2012's runner-up, and over an hour more face time than Muir had in 2011.

Those are the findings in the 2012 Year in Review from the Tyndall Report, which "monitors the weekday nightly newscasts of the three American broadcast television networks."

This year, the report concluded Muir's reports for ABC World News with Diane Sawyer filled 426 minutes of airtime during 2012... that's seven hours and six minutes, to be exact.  And that only includes Muir's appearances as a correspondent -- the report doesn't consider his appearances as an anchor.  Muir anchors ABC's weekend newscasts, and serves as the primary substitute for Sawyer.

Tyndall says this year's runner-up is NBC's Andrea Mitchell, whose reports on NBC Nightly News with Brian Williams totaled 269 minutes for the year.

When Muir topped the list a year ago, Tyndall's tally of Muir's reports during 2011 came to 343 minutes.

Muir graduated from Onondaga Central School and Ithaca College.  He started out at Syracuse CBS affiliate WTVH as an intern, and eventually became a reporter and anchor for the station.  A few moves later, Muir joined ABC News in 2003 and will celebrate his second anniversary of being named regular weekend anchor of ABC World News next month.